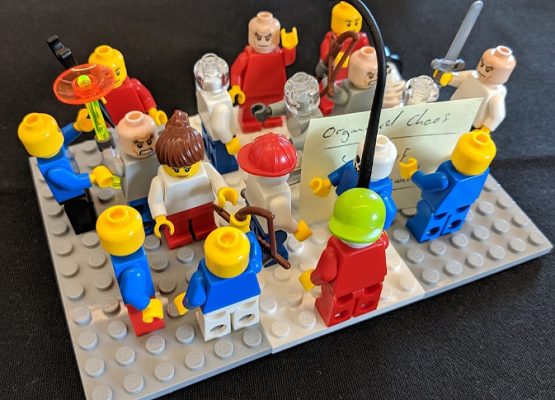 Senior Lecturer in Strategy and Enterprise, Pam Seanor recently hosted a workshop for NMI, a payment solution company, in Lego ® Serious Play®. Read her account below:

Between practice and theorising

Serious-playing with Jayne Purcell, Service designer, we facilitated a day workshop with NMI – “You’ve probably used NMI’s software when booking a train ticket, paying for parking, ordering a burger or most recently making a contactless charity donation, without realising it! NMI develops the most trusted payment software for mobile, online, and in-store payments that is relied on and used by millions of people worldwide, 24 hours a day, 365 days a year” ( https://bristolcalling.com/company/nmi/ ).

As such, the organisation has explicit creative processes and outputs that come together worked on by differing teams. Further, NMI have recently been engaged in a merger and are now part of global organisation with offices in Chicago, IL, New York, NY and Salt Lake City, UT. The Bristol office wanted to try out LEGO® SERIOUS PLAY® with the intention to come together over their working within a changing work culture, how they work and how they are going forward as the organisation grows.

We created a space to exchange ideas and develop awareness of differing perspectives and complex themes that encompass social aspects of group practices and activities aiming to reach out to the members of the organisation (Nicolini & Monteiro 2017). Based this encounter, we address the following applying a practice-based approach to entrepreneurship (Nicolini 2012) in part using Lego bricks to play seriously and in part to reveal collective critical reflection.

LEGO® SERIOUS PLAY® (LSP) is a process underpinned by theorizing and there is increased interest of how academics are using it and more widely serious play with a purpose (Statler et al. 2011). For instance, Gauntlett (2015) stated “it is a playful method of differing applications to help gain insights in to personal and collective understanding of a problem as well as imagine possible futures”. The process has common ground rules/ etiquette: posing the question – the purpose of the workshop; constructing models; sharing and listening to others; reflecting (White paper on LEGO® SERIOUS PLAY® 2013). Both Jayne and I are trained LEGO® SERIOUS PLAY® facilitators. Where Jayne has been a Certified facilitator for a decade, I became an LSP facilitator in January. We have been collaborating to devise skills workshops and structured tasks and prompts for learning ePortfolios in my enterprise & entrepreneurship modules with undergraduates – so I had been practicing playing with Lego with large numbers of students. Even so, it was a little daunting taking a low-tech tool like Lego to a creative/high tech organization, including members of the Chicago office who travelled over.

And, as a critical researcher I want to speak to how challenge is a central part an LSP workshop. Statler et al. (2011) noted the paradox of serious play as a process of working through paradoxes rather than removing all tensions and contradictions that arise in everyday work practices. On the one hand, I am really interested in working with organization to create “other” spaces for play (Hjorth 2004), on the other hand I am hesitant to promote play as an outcome similar to how organizations like Google seem to be using it managerially to keep people at work to be more productive (Ashton & Giddings 2018). However, as a facilitator, my role is not to intervene, nor to promise participants specific organizational outcomes from the workshop.

It was not possible for all members of NMI to take part; the workshop was 5 groups of 10 participants at each table. These groups were arranged by a member of the NMI team as they often work together on projects in the organisation.

The workshop offered an opportunity to engage in play activities that they would not normally do in work and differing types of social encounters (e.g. to the worst holiday model build we had one participant share a poem of this family holiday – An ode to a dead cat).

We had initially intended to move members of teams around during the day; however, we felt some flexibility was needed and discussed this with the organiser and chose to keep within teams to better draw people out. After the morning practising how to play the LEGO® SERIOUS PLAY® way, the afternoon was focused on play and “the spirit in which we do what we do, the feel of the team”.

Taking care not to include any people in these images, photographs were taken of models metaphorically representing some of the real-world concerns about working at NMI. The focus is the model. Each post-it note is a few words to describe the key point of their model. Prior to the photos being taken by one of the members of the NMI team, permission was asked to use them in this blog.

Anyone not wishing to be included was asked to speak with one of us as facilitators. And, the draft of this blog was sent for approval prior to circulating. In the spirit of participants telling their own stories, rather than me as a researcher crafting the narrative, the following are examples of differing metaphors to represent their ideas.

Before, I want to highlight that we offered a day for the workshop 9.30AM – 4PM to give participants the opportunity to get used to playing and to play. Even with this time, we could not cover all that we hoped, and we agreed with the organiser that this was a useful starting point from which he could take forward ideas emerging.

WELCOME – A model of feeling welcomed – a few participants newly joined the team – of the team engaged in their open plan office and sitting with their computer screens in front of them and of taking the time to be welcoming.

BRISTOL FOOD & DRINK – This model depicts the area near the office. The location is in the harbourside reflected with the bridge and one of the harbourside cranes created to show the value of being able to go out for coffee/lunch in these areas and of the value of regularly seeing sea birds (and of socialising after work).

COMPASSION – this model holds 2 key metaphors, the rainbow towers and the ladder above as bridging together the organisation. This also reflected other models that were of diversity and balance and valuing members of the team – here represented by many mini figures.

KNOWLEDGE & WISDOM – A concern of change for one was nurturing and maintaining the knowledge and wisdom shared by people who have long worked in the organisation represented by this tower/library build.

At the end of the afternoon, every shared model was placed and presented first one, then the next, and then next, on an empty table and briefly explained by a member of the team creating it. All participants were asked to gather round the table, to listen and once every model had been presented to have a look round. This process was to allow space for all ideas to be heard. These models can be seen in the link, motion image of the shared models created by all of the teams.

Gutzan and Tuckermann (2019) noted “Although scholars have begun theorising the social notion of collective reflection in organisations, empirical studies illustrating these often-neat theoretical conceptualisations are still rare”. Through the use of Lego, as above, a few common themes were raised and heard – one of the members of the Chicago office commented that she had no idea people felt these ways. Feedback after the workshop was generally positive (NMI created a quick and dirty survey to capture participant views).

We did not assume that collective reflecting would only occur on the day. Instead, that it would be ongoing to improve organizing at NMI. Rather than my words, I offer an email from one of the management team who organized the day of listening to the messages from the day and reflecting afterwards –

As such, NMI are not only seeking new location and also creating “other spaces” for play. Too, we are discussing the possibility of further serious play sessions for other members of the organisation. One aspect that somehow escaped mention in planning conversations and a meeting before the workshop was of the intended move of the office location. In hindsight we might have built more in to the intention of the day in this seemingly contradictory objective of a move and of the challenge of creating an “other” space.

This blog has been written to grapple with the paradox that Matt Statler and his colleagues speak of in serious play that might bridge between theory and practice and to provide a point of contact for future research of how we might make the challenges in theorising of serious play and collective reflection more useful for practitioners, and what we as academics might learn from practitioners. If you are interested in discussing these ideas of how serious play might contribute to critical approaches to organisation studies and/or creativity throughout the organisation to address challenges as part of the stream of entrepreneurship as practice, please contact Pam Seanor – pam.seanor@uwe.ac.uk

Thanks to Nigel and Emily for the use of his photographs and for inviting us to work with you and members of the team at NMI Bristol.