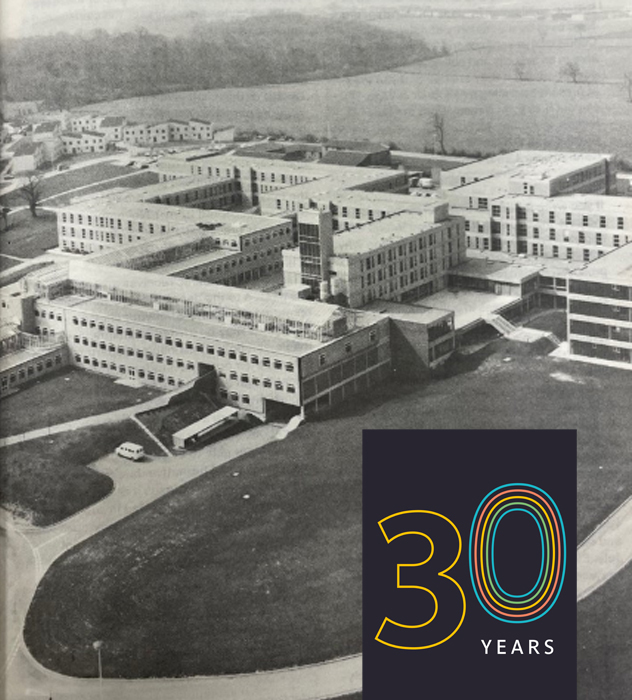 Frenchay, Glenside and Bower Ashton campuses are brimming with memories for hundreds of thousands of alumni, staff and students. They have been the backdrops to transformative times in our lives – be that our first time away from home, a move to a new job or city, or a change of direction.

As well as setting the scene for our changing lives, they themselves have undergone many transformations and developments throughout the years.

Here’s a snapshot of our campuses through time.

Glenside was built in 1861 but still looks largely unchanged today. The historic buildings juxtapose with the state-of-the-art simulation and virtual training facilities that are housed within.

Originally Bristol’s ‘Lunatic Asylum’, it was later used during the First World War to house wounded soldiers and was renamed Beaufort War Hospital.

After the war it returned to housing patients and in 1959 was renamed Glenside Hospital. By 1992 the hospital was closing wards, and over the next three years was phased out, becoming the Avon and Gloucestershire College of Health.

This year, in one of the most ambitious simulation exercises hosted by UWE Bristol to date, a section of a Boeing 747 aircraft was transported onto Glenside Campus and a crash site wreckage was staged.

Students from across the university were involved, including paramedic, nursing, forensic science and filmmaking students. The exercise took nine months of planning and was supported by staff from Avon & Somerset Police, Avon Fire & Rescue Service and South Western Ambulance Service.

Glenside continues to be a key space for the city’s mental health, now with a focus on making a positive change. Our BSc(Hons) Nursing (Mental Health) focuses on is dedicated to making a positive change in the field, encompassing improving access to healthcare, wellbeing, social inclusion and quality of life. Likewise, Glenside Hospital Museum is dedicated to preserving the buildings and artefacts to shine a light on historic treatments of mental health.

The West of England College of Art was established in 1969 in purpose-built premises at Bower Ashton. It moved from its previous location as the art school of the Royal West of England Academy in Clifton. In 1970 the College became part of Bristol Polytechnic.

By the early 1980s the site contained a theatre, library, exhibition, gallery and studio.

In 2008 Bower Ashton was redeveloped and UWE received an Environmental Award from Bristol Civic Society for the redevelopment. The original campus buildings also saw an upgrade with specialist teaching spaces added for Animation, Photography and Graphic Design.

City Campus now connects our teaching and learning with some of the best creative and cultural organisations in Bristol. Our powerhouse of creativity encompasses Bower Ashton and shares three iconic harbourside buildings – Arnolfini, Spike Island and Watershed.

Named after the nearby village, Frenchay Campus was purpose-built on former farming land. Construction began in 1973 the doors opened for the first time in 1975.

Back then the campus was a group of lone standing buildings with very little in the surrounding areas. Professor of Contract Law Adrian Chandler speaking in 2012 recalls,

“There was a feeling of it being intimate, everything around was totally green, cut off from everywhere, traffic was wonderful!”.

Built in 1978 The Octagon in Frenchay has retained its original purpose as a place to serve the cultural, spiritual and social needs of staff and students. A sanctuary, place to reflect, relax and have some quite time of peace, prayer and meditation.

Expansion and development of the campus has been constant throughout the years. Most recently the impressive new Bristol Business and Law School opened in 2017 and the new Engineering building, which officially opened in 2021, has won multiple awards.

Where do you fit into the story?

What are your stand-out memories of your time at UWE Bristol? We’d love to hear your stories. Tell us what you’re doing now, share an old photo.

Seriously good prizes for a great cause

Play our 30th anniversary prize draw for your chance to win one of 30 fantastic prizes, kindly donated from alumni and the wider UWE Bristol community.

100% of funds raised from ticket sales will go to the UWE Bristol Fund to support Student Hardship Grants.

Buy a ticket and find out more about other ways we’re celebrating 30 years of being a University.