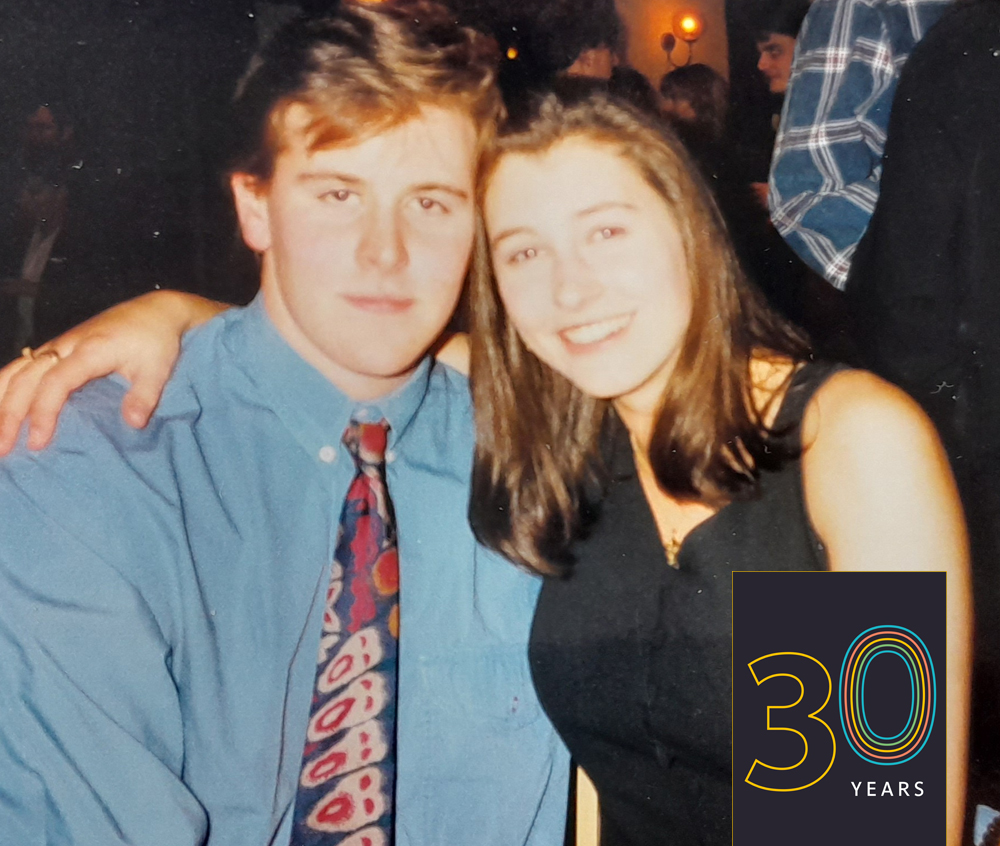 Kathryn and Matt Colledge on their first date

University life is about the people as much as the studying. A time for creating memories and making lifelong relationships whether romantic or platonic.

Here are 10 stories from people who met a soulmate at UWE Bristol, told in their own words.

“I started at UWE in Sept 1992, making many new friends. I featured in the 1994 prospectus, alongside friends Sam and Matt. The three of us and three others then all lived together in our 2nd year.

We’re all now happily married, with six children between us. We meet up regularly and always have a laugh. I cannot believe that our eldest son is now about to embark on his University life – time flies!”

“My husband and I met at UWE. We started in 1996 and were both in Bishop Monk Halls of residence on St Matthias Campus. We married in 2009 and had twins in 2015. We now live in North Somerset. Still in touch with others from our very happy years at UWE.”

“I studied here for both my BSc(Hons) Biomedical Sciences (2005) and my MSc Medical Microbiology (2010). I remember both times fondly – the great food, the great bar and great fun on campus on a Friday night!

I made great friends during my time at Frenchay Campus, one of whom, Nicole, is still a ‘bestie’. We were bridesmaids at each other’s weddings.

I achieved so much here and I’m still studying. I’m currently training to be a Consultant Clinical Scientist. Thank you UWE for setting me up both academically and personally”.

‘In 2002, our eyes locked in P block, travelled the world, got married and two children later and we’re still best friends. The vast majority of our friends are alumni too!”

“I met Sara when we both lived in Bishop Monk Halls of residence at St Matthias Campus. A great and enduring friendship was made between us and many others in Bishop Monk. Old friends are definitely the best!”

“I met the wonderful Natasha while we were both working as Student Ambassadors in our final year in 2014. Nearly 8 years later, we have just celebrated one year of marriage and have also welcomed our daughter into the world!”

“I’m lucky that my two best friends are the friends I made on my course and in my first year house. I also met my husband on the patio outside Traders (now Starbucks)!

Kim and I were on the same course and met through mutual friends on a night out. Everyone else wanted an early night, but we both wanted to go dancing, so stayed out together. We ended up in Chicago Rocks on the waterfront (just to age us). The night ended with us swapping shoes, we have been best friends ever since.

We lived together in our final year, have travelled together, were bridesmaids for each other and are god parents for each other’s children. This year marks 20 years since we met! We might even go dancing and swap shoes to celebrate!”

“I met my Husband at UWE. We were on the same course but mostly got to know each other through the centre for performing arts. We were both in the Showstoppers choir and did singing lessons. We met in our second week and finally got together right before graduation 3 years later.

We celebrated 10 years together in April 2022 and were married in September 2021 after postponing twice due to Covid. I have no idea where my life would have gone without UWE and I couldn’t be more grateful for my time and opportunities there.”

“My wife and I met at UWE Redland campus in 2002 while both in the third year of a four year Qualified Teacher Status course. We both were in teacher training and were on final placement together in 2003. We have been married 20 years this year!

Charlotte is currently Acting Head of a primary school in Greenwich and I am CEO of a Multi Academy Trust of 6 schools in Bexley and Bromley.”

“For my third year at UWE I had the option to go on a year abroad with Erasmus to Radboud University in The Netherlands. So I took that opportunity and had the best year of my life!

I learnt so much about the culture and myself and made some great friends with people of all different nationalities. I also met my soulmate on the front steps of our student accommodation there, and we’ve been in a relationship together since.

We now live together in a flat in Sheffield and I’ve never been happier. I feel so lucky to have had the chance to go on a year abroad with UWE and would definitely recommend it to anyone else!”

Tell us your story

Did you find a soulmate during your time studying with UWE Bristol? We’d love to hear your story. Tell us what you’re doing now. Share an old photo, share a new photo!

Seriously good prizes for a great cause

Play our 30th anniversary prize draw for your chance to win one of 30 fantastic prizes, kindly donated from alumni and the wider UWE Bristol community.

100% of funds raised from ticket sales will go to the UWE Bristol Fund to support Student Hardship Grants.

Buy a ticket and find out more about other ways we’re celebrating 30 years of being a University.