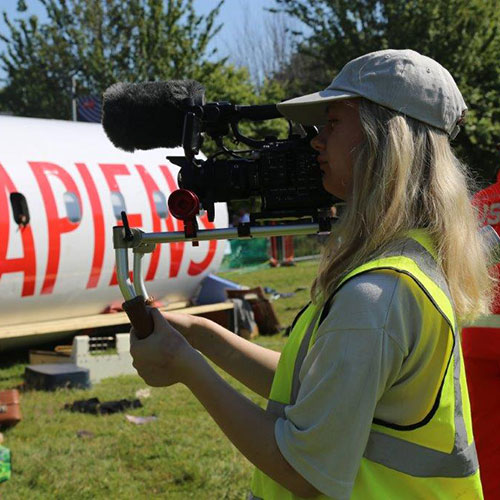 UWE Bristol undergraduate, Kate, tells us how a unique learning opportunity gave her the chance to try out new skills, which has inspired her to consider new career options. Read more about Kate’s story.

“When I first heard about the Glenside major incident exercise from our teaching team, I knew I wanted to be involved. After all, this was one of most ambitious simulation exercises ever hosted at UWE Bristol. It took nine months to organise and involved 500+ people, so what a great opportunity to film this experience.

What was the Glenside major incident exercise?

The University wanted to bring learning to life by simulating a commercial airliner disaster for a major incident training exercise for students at Glenside Campus. They created this using a section of a Boeing 747 aircraft and staged a crash site wreckage in a field on campus. Staff set dressed it to look like the plane had just crashed. Some people played the part of injured passengers alongside dummies with cards around necks detailing the injuries sustained.

It was amazing how many students benefited from this exercise. Healthcare students from Adult Nursing, Paramedic Science and Physician Associate courses got the chance to test their skills in an emergency situation. Drama students played various roles alongside professional actors, and of course Filmmaking students, like myself, were there to gain experience behind the camera.

What was your role on the day?

As a Filmmaking student, I was in the centre of the action to follow the story from start to end. They announced the plane had crashed and then more and more people appeared on the scene. People were screaming and covered in fake wounds created by special effects make up. I filmed the students triaging and treating the casualties at the scene and then sending them off by ambulance to a simulated major trauma centre.

It all felt like it was really happening, and as the simulation was so well staged it was a great chance to see how you cope in a stress situation, especially for the healthcare students acting as first responders.

What did you gain from the experience?

I was excited to be involved in the simulation as I’m keen to get into camera work, and this gave me a chance to practise new skills without it being an assessed module. This was great as I didn’t feel any pressure on being graded.

The filming experience was very different to the filming I do on my course. Everything on the course is normally very planned, so this was something completely different. You felt like you were being thrown into this crisis situation and I had to trust my filmmaking instincts worked under pressure. I had to think on my feet and decide what should be covered and how to get the best coverage of the situation when interviewing people telling their story through film.

The simulation was such a great exercise. It offered a really unique learning opportunity for students across many courses to put their skills into practice. Having previously shied away from camera work, believing my strengths were in directing and producing, this was my chance to try it out. And the great thing is having had this chance, I can now really see myself moving more in to camera work. Without this experience, I could have missed out on this career-changing opportunity.”