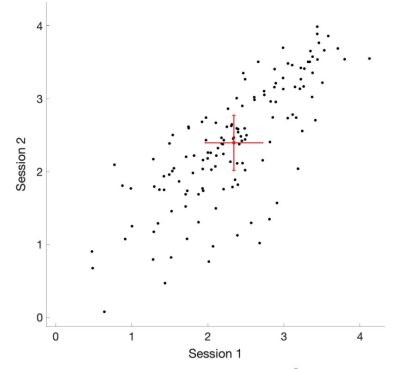 The authors argue that considering the test-retest reliability of a perception or attention task is crucial if researchers wish to use the task to assess the impact of individual differences (e.g., traits, experience) on performance. The issue is rooted in the historical development of vision science tasks, which were often designed to minimise differences between participants in order to understand a cognitive mechanism more generally. With an increased interest in looking at the influence of individual differences on perception and attention, researchers are now using the same tasks, but these tasks may not have a sufficient spread in participant variability to tell us anything meaningful about individual differences.

To assess test-retest reliability, Dr Clark and her team tested 160 undergraduate psychology participants on four commonly used tasks in vision science. The tasks measured a range of perceptual and attentional faculties such as sustained attention, motion perception, and peripheral processing, and each participant was tested twice, 1-3 weeks apart. The results demonstrate a range of reliabilities (as measured by the intraclass correlation coefficient, or ICC), indicating that some tasks (and some measures within these tasks) are more suitable for the exploration of individual differences than others. As expected, higher ICCs were associated with higher between-participant variability. The authors also reviewed a wide range of vision science tasks with known reliabilities and summarise these statistics in a useful reference table for future researchers. Finally, they provide detailed guidelines and recommendations for how to appropriately assess test-retest reliability.