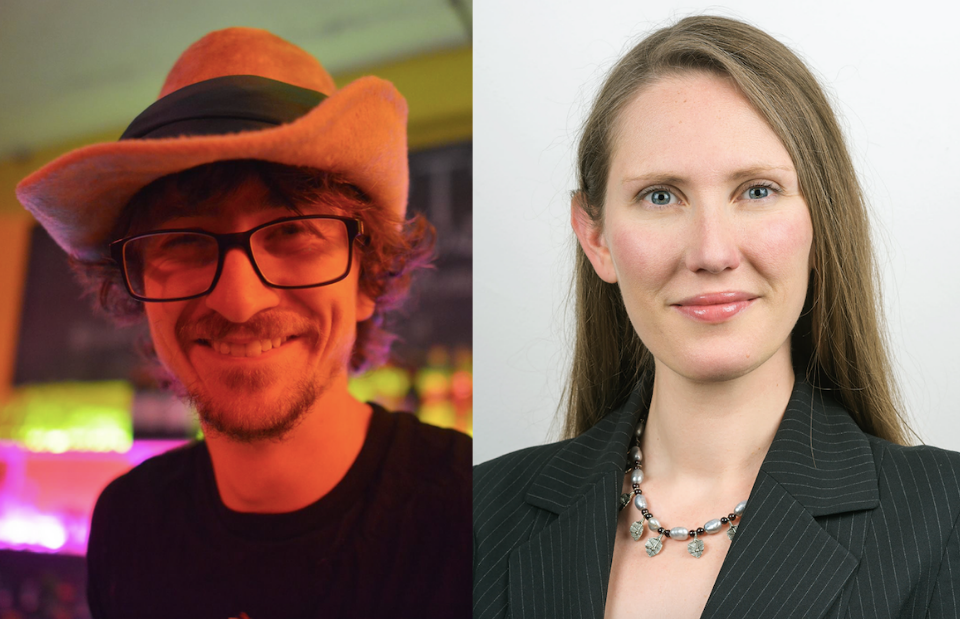 We are excited to welcome two new social psychologists to PSRG! Matt and Emily joined UWE in January 2020 and have recently joined the Promoting Psychological Health theme of PSRG. Read on to learn more about our newest members!

My name is Matt Wood and I have joined the UWE Department of Health and Social Sciences as a Lecturer in Social Psychology.

I conducted by BSc in Psychology and my MSc in Health Psychology here at UWE. I then moved to Newcastle where I joined the EPSRC Centre of Doctoral Training in Digital Civics to conduct my PhD. My PhD was about how young people construct and contest a gendered and sexual identity through digital technology, using discursive psychology to consider how young people talked about sexual bodies, sexual cultures & sexual health.

The majority of my work is situated in Human Computer Interaction (HCI). At its core, this is about how people (users) interact with computers, and a great deal of work in HCI is focused on interfaces and making these more usable. HCI is however an incredibly broad field, incorporating perspectives from computer science, psychology, sociology and design, to name but a few.

Broadly speaking, I am interested in the qualitative dimension of social computing. This means I’m interested in the role digital technologies play in our social interactions with others – which of course has become highly topical since the pandemic of Covid-19. But in adopting qualitative methods, I am interested in unpacking the ‘messy reality’ of the social role of technology in people’s lives. These can often be contradictory, difficult, and intercept with other aspects of people’s lives, including identity and personhood. A great deal of my PhD was spent looking at young people’s talk/discourse around digital technologies, and how they positioned these in negotiating a gendered and sexual identity.

Much of my published work has been around technosexuality, i.e. the overlap between human sexuality and technology. Perhaps most notably I have used the ‘Story Completion Method’ to explore understandings of Virtual Reality Pornography & interactions with Sex Robots. I am also a member of the Story Completion Research Group. Many of my students opt to use story completion in their third year projects, where I supervise topics around sex and sexuality, relationships between people and technology, and critical health psychology.

I am thrilled to join the dynamic researchers at PSRG, and I am excited to call this interdisciplinary group my research home. In May 2020 I was awarded a Vice-Chancellor Early Career Research Award to explore the qualitative dimensions of immersion in virtual reality, with an application to Science Communication, which I’m conducting in partnership with UWE’s Science Communication Unit.

My name is Emily LeRoux-Rutledge and I have joined the UWE Department of Health and Social Sciences as a Lecturer in Social Psychology.

As a Canadian, who has lived in Kenya, France, Bangladesh and the UK, it’s perhaps not surprising that I’ve been drawn to research on identity and migration. My current research looks at how the identities of refugee and diaspora groups in the UK are affected by ongoing violence in their countries of origin, and how this impacts wellbeing.

Broadly, my research examines the identities of marginalised groups in global contexts – which encompasses a lot of things! For example, I look at how the media constructs narratives about people, how people interpret media narratives, how people construct their own identities, and how they negotiate their identities in the face of local and global narratives about who they are, and who they should be. I use primarily qualitative methodologies, and take a narrative approach to identity.

Prior to my academic career, I spent ten years working in the field of international development, managing research for organisations using media and communication for development, and I continue to work as a consultant in this sector. I’ve conducted research on a wide range of topics, from public health to climate change, and I’ve worked in more than 20 countries, including Bangladesh, Cambodia, the Democratic Republic of Congo, India, Kenya, Niger, South Africa, South Sudan, Senegal, Serbia, Tanzania and Uganda.

I’m delighted to join the Psychological Sciences Research Group at UWE, and look forward to working and collaborating with my many wonderful colleagues!