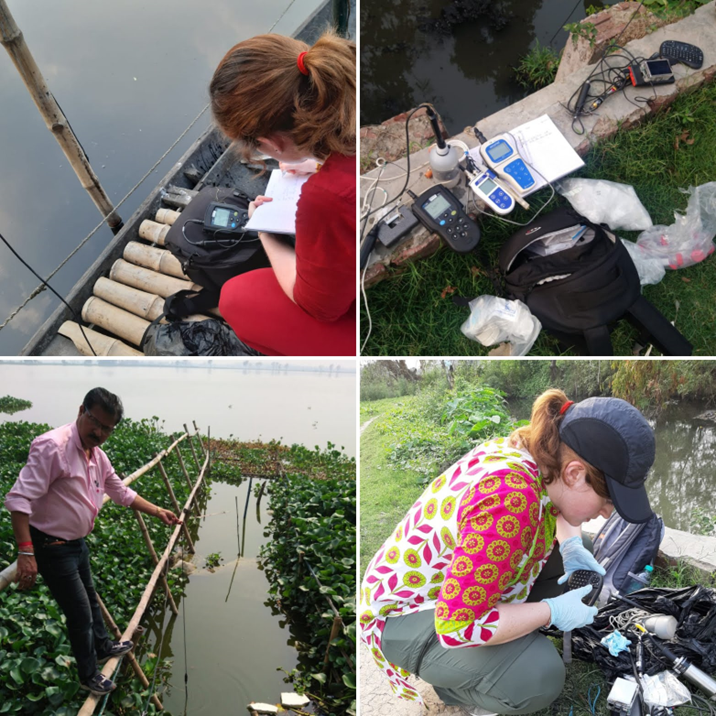 Written by Bethany Fox, Research Associate in Centre for Research in Biosciences (CRIB)

A new paper has been published in Science of the Total Environment (STOTEN), “A case study: The deployment of a novel in situ fluorimeter for monitoring biological contamination within the urban surface waters of Kolkata, India”.

This paper details the deployment of a novel in situ fluorescence sensor in the urban surface waters of Kolkata. The case study demonstrates the benefit of this technology with recent advances in understanding and technological capability. Using the new sensor, developed by our technology partner Chelsea Technologies Ltd., the team were able to identify a blackwater contamination event in the Hooghly River (Ganga) in Kolkata, India. The team also conclude that the use of this technology would provide information regarding biological water quality in situ and in real-time, important information which is often missing from our current monitoring practices due limited to time consuming and expensive sampling surveys.

This paper is an output from the NERC-DST India-UK Water Quality project which focused on the development and implementation of technologies for improved water quality. Within this project, UWE has been in partnership with Professor Tapan K Dutta and his team at the Bose Institute in Kolkata alongside multiple UK technology partners. 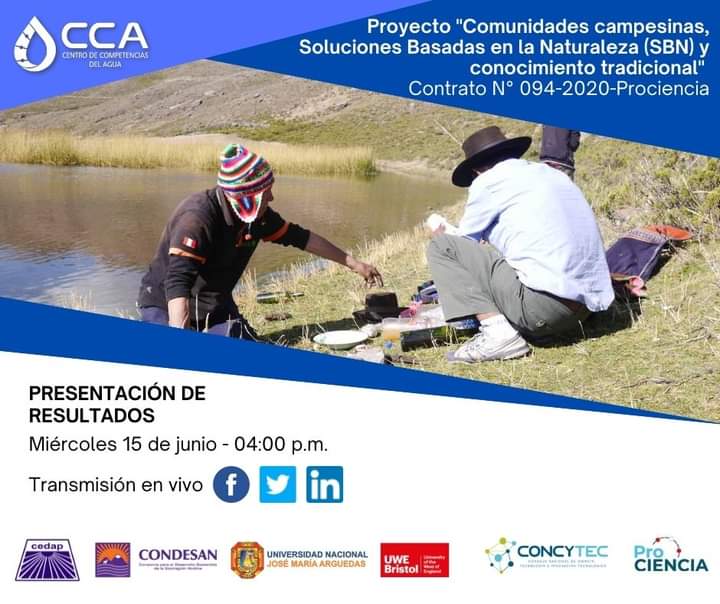 Over the last decade UWE Bristol, through the International Water Security Network, has partnered with Centro de Competencias del Agua in research focussing on the role of “nature-based solutions” (also called “green infrastructure”) in helping highland Peruvian communities adapt to climate change (see link to earlier collaborative activities here).  In recent years Peru has enacted laws for supporting “payment for ecosystems services” (PES) and sustainable development of indigenous communities.   From 4.00 to 6.00 pm (Peru time) on Wednesday June 15, 2022 the CCA team is hosting an on-line workshop to discuss the latest results from research focussing on indigenous knowledge and nature-based solutions for sustainable development.   There will be a particular focus on challenges facing Apurímac, Ayacucho and Huancavelica, three of the poorest districts with the highest indigenous populations in the Peruvian highlands and the role of indigenous knowledge and practice in aiding adaptation. The workshop will discuss research into indigenous processes of capturing and storing rainwater for its infiltration and refill of aquifers or other bodies of water, such as springs and slopes, referred to as “Sowing and harvesting water.”

The event will be broadcasted via the Facebook page of the Andes Water Program at https://www.facebook.com/CentroDeCompetenciasDelAgua 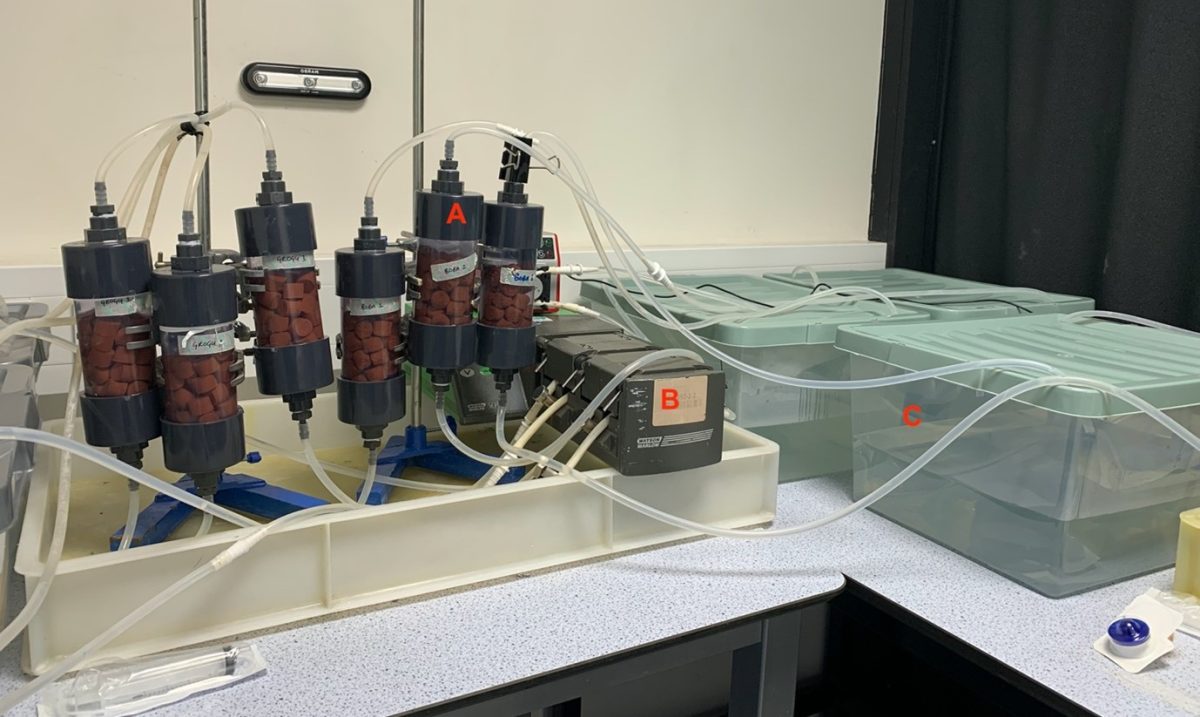 Freshwater is essential for life on Earth, and the role of freshwater is fundamental to society and for maintaining healthy ecosystems. Biological filtration is a sustainable biotechnology used to remediate biological and chemical contaminants within water. This is performed by establishing polymicrobial biofilms (diverse microbial communities) on a granular substrate, that can be housed within a column, here referred to as a biofilter. Biofilters develop efficient sorptive (attachment) capacity within diverse microbial communities of biofilms.

Filtration media has come in many forms prior to recent experimentation including sand, charcoal and granular activated carbon. Different filter media properties, including permeability, surface area and porosity, can determine the performance of the biofilter. As such, practical knowledge is needed regarding the impact of the type of filter media used. In this example we used ceramic media, more specifically terracotta clay, varying in porosity as described in the previous blog post. The team at UWE’s Centre for Print Research (CFPR) created ceramic media of low, medium and high porosities to determine the impact of porosity on the biofilter systems.

The three variations of ceramic media were equally distributed into three individual filter columns (9 filters in total) and connected to 25 L tanks containing tap water. To aid the beginning stages of biofilm maturation, the water tanks were inoculated with pond water to introduce environmental organisms.

Over four weeks of biofilm maturation, the biofilters were monitored weekly for nutrient concentrations (such as phosphates and nitrates) and bacteria. Samples were extracted from both the filter media and the circulation water for analysis.

An investigation of porosity of media and pathogen removal

Once the biofilters had undergone maturation, the experiment investigated the removal of Escherichia coli (E. coli)and Enterococci, both are bacterial indicators of faecal contamination. Over a 24-hour period pond water was circulated through the biofilters containing the different porosity ceramic media. Samples of the circulated pond water were collected every three hours and analysed for the presence of the E. coli and Enterococci.

Preliminary results indicated a decline in both E. coli and Enterococci recovered from samples taken over a 24-hour period. However, initial findings suggest that the ceramic media porosity has little impact on E. coli and Enterococci removal as there was little difference between the bacteria counts for the three different porosities of ceramic media.

Further experimental work is ongoing to explore pathogen removal in more detail and to determine if the size of the ceramic media (e.g. smaller ceramic beads) impacts the performance of the biofilter.