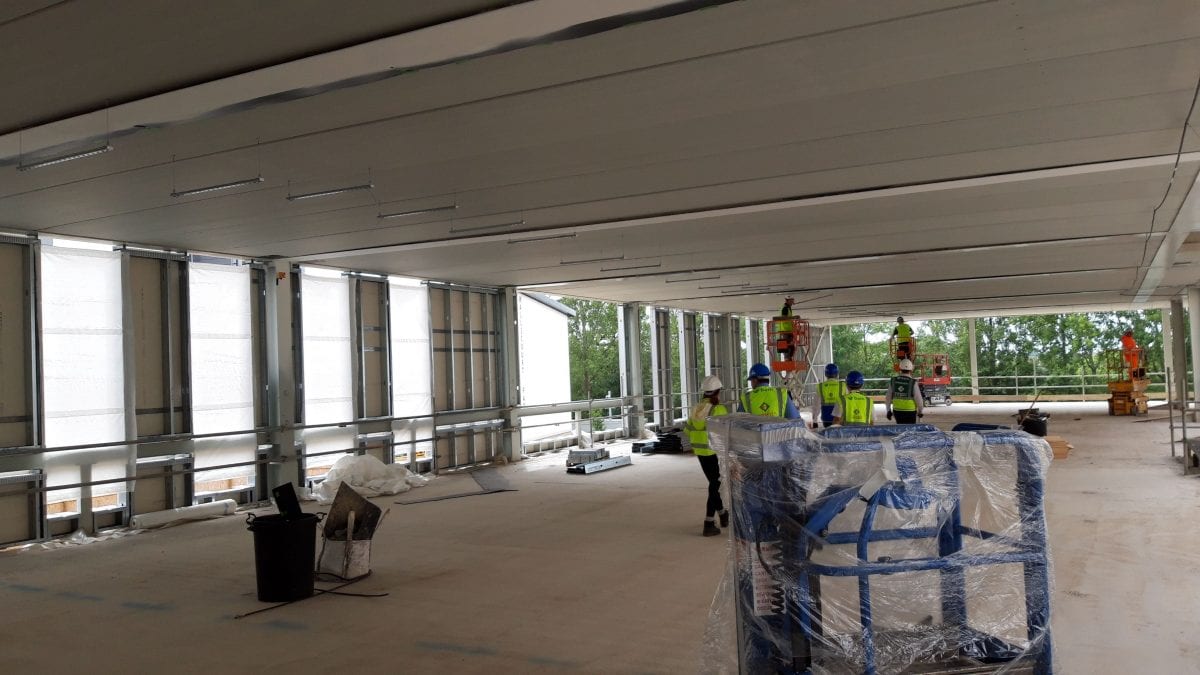 Two years ago, amid great excitement and trumpeting a new Engineering building was hailed, here at UWE committees were formed, and plans made, remade, tweaked and finally the architects, our own estates, and the department, formulated a plan.

At the beginning of 2020 we were due to move in around the middle of August to have the building ready for students for the end of September, ready for the new term. About six weeks we thought that should be enough time, little did we know then.

In steps a new player in this game, an almost invisible entity waging war against life the way we know it, even life itself. I speak of course of Covid 19 and its ramifications pervade this story in many ways. The building work was reduced in pace and the finish date by the contractors was put back several times.

In the end it was agreed that only the top two floors would be finished in time for the start of term and the rest would be completed by Christmas. The 3rd and 4th floors containing the Electronics labs, the PC suites for modelling and stress analysis and the staff offices. These were to open for face to face lab sessions in Block 1 starting on the 19th of October. Of course the student lectures and tutorials are online still and this this wont change until the Covid menace has been removed.

So now we had a deadline, and a mountain of stuff to sort, pack and deliver to places we had only seen plans, photos, and a brief visits, before even the floors were installed. Originally the new building would accommodate 100 seats of Electronic workstations and this was a considerable upscaling from the old building. New equipment was bought to make up the difference and this along with the original kit most of it less than two years old was stored ready to be packed by Pickfords our removers.

Plans were printed and storage drawing were devised too, which allowed a scheme of storage to be worked on to allocate the right kit to the right room. However, the reduction in room capacities due to Covid made Timetablings job almost impossible and it quickly became apparent that with a few exceptions there would be multiple classes duplicated across the four labs. So we decided to get the kit away in its various cupboards and drawers. A new system of indentifying what’s where, was developed, and when we moved in this was used, amending where appropriate, to ensure nothing couldn’t be found.

Whilst all this was going on the team checked the new Apps anywhere software deployment system made safety training videos and advised on safety risk assessments. Two also managed to undertake trade union duties as a Health and Safety rep the other a Workplace Steward and Environment officer. There were a few issues with regard to H&S unsurprisingly and some due to clarifying decisions made in the light of joint union, H&S unit and management decisions.

We as a team, there are five of us mainly involved, made the decision to move the small component bins ourselves. Electronics has a huge number of small components required for the 12 different modules we support and stocks of these are required to allow the student engineers to make realtime design choices. If these bins got spilled it would take a huge amount of scarce time to sort them out again so we trolleyed them between the old and new buildings.

Covid precautions were difficult to adhere to, and admirable efforts were made by all the team to shift stuff while socially distanced with alcohol wipes, masks, gloves and hand gel featuring heavily.

The labs were organised then reorganise and some basic safety checks were carried out and some rewiring of the labs was necessary to make them safe for use by the students and staff.

Several projects have been put on hold and will be frozen until Covid disappears which is disappointing but necessary.

As of the 19th of October we have been covering our timetabled labs and slowly building the facility back to its former functionality. This has required active and dynamic prioritisation and allocation of people. We have also had to contend with the retirement of two members of our team, illness and self isolation reducing our numbers at times still further at times .

As far as we’re aware apart from Covid restrictions the students have not had any detriment to their education indeed because we have become more involved in delivery, they are receiving a more practical education than before. The real downside for them is that they cannot repeat failed experiments, so we have to support them more to finish their assigned tasks.

Several new skills were acquired by members of the team, during the course of the move, and some old ones rekindled. This allowed us to undertake the move without a lot of help from outside agencies.  Exceptions to this were techs from Its and colleagues from the rest of the FET tech team.

I think its true to say as the maxim says “Technicians make it Happen” and when the rest of N Block moves it will be no less true then especially as they have some chunky kit to shift.

We still have lots to finish in our move, and we look forward to a time of greater stability, getting back to the old normal.

We would like to thank our colleagues for assisting us through this tiring and challenging times we haven’t mentioned names but if you read this you know who you are. Thank you.