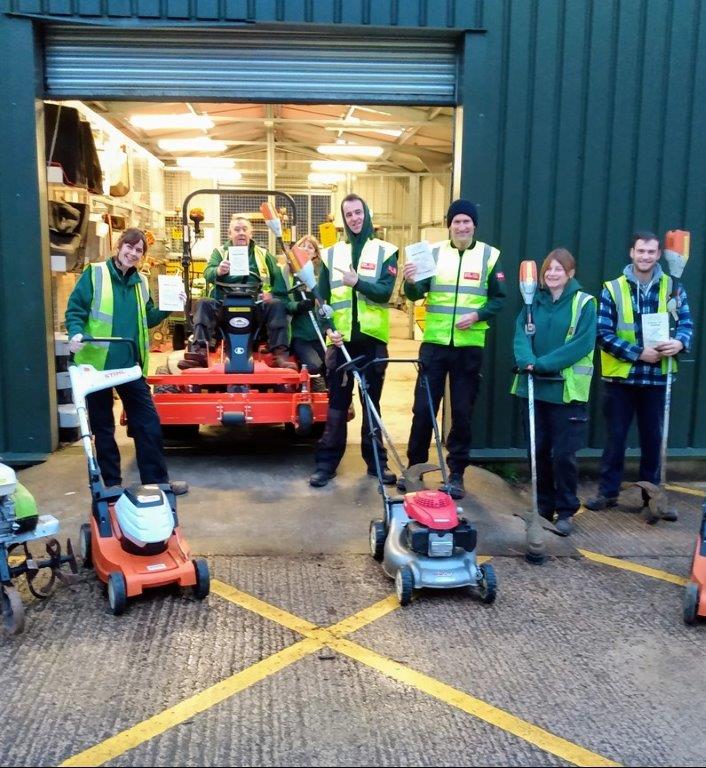 Maintaining a high standard of care throughout three large campuses is not easy, but this hasn’t put off UWE Bristol’s Grounds Team from setting high targets for the year ahead.

The hard work from last year has already been recognised on an official level, granting the team a DEFRA Award for Frenchay’s ‘Beeline Project’ and a recognition of Bronze Status by the British Hedgehog Preservation Society for 2019/20. The recent praise is just what the Grounds Team at UWE Bristol deserves, as Grounds Manager, Richie Fluester, says. “There’s about 17 of us in total, spread across all the campuses. There’s a really good team ethic among everyone.”

The team manages the grounds at Frenchay, Glenside and Bower Ashton. In the past, attention was paid greatly to the upkeep of more traditional hedges and lawns, but the team’s vision has evolved more recently to reflect the environmental needs of the British landscape. Improving the university’s natural sustainability by planting more pollinated and edible fauna, developing eco-balanced pond areas, encouraging orchards to flourish, and meadowscaping previously baron lawns, has been at the forefront of the Grounds Team’s initiative for the past several years.

There have been lessons learned in the process. According to Richie, the positive impact on campus has also helped “encourage sustainable gardening for staff and students alike” and that individuals’ ideas are always taken onboard in UWE’s supportive community.

We want to engage people – locals, staff and students alike.

Some projects have made the team particularly proud, like the Grounds Team’s mission for all machinery to be 100% carbon-neutral by 2030. “Several years ago, students would have had to dodge their way around petrol tractors on campus to get to their lectures,” says Richie, “but in recent years the golf-style buggies, powered by batteries, are barely noticeable. We’re 80% there already with hand-held tools so now we’re looking at replacing old equipment with new sustainable equipment over the next decade.”

Another new initiative to look forward to this year is the re-usage of ground coffee, starting with Frenchay’s Student Union bar and the coffee cart by the fruit and veg stall. Certain chemicals in used coffee can be damaging to plant growth, so the team are trialing quantities to make sure it can be added to the nearby compost areas without any negative effects. Once this has been successfully established, the recycling process will be applied to the other campuses.

The Grounds Team are eager to share the Frenchay campus success with Glenside and Bower Ashton this year. Their achievements with the Beeline project means more edible herb gardens and pollinated plants can be added to flower beds in Bower Ashton soon, with maps and biodiversity grids currently being designed. A new cycling path plan is also in development to run alongside Ashton Court Road to keep commuters safer.

At Glenside, the team have been working hard to build up the varied tree population. Students and staff can journey through the woodlands during the Tree Walk which will run each month during term time. There is also a continuing effort to meadow-scape the once very traditional lawns on the campus to bring bees and other pollinators back to the area.

Making all three main campuses hedgehog-friendly is also a key priority for Richie, but his team needs the help of everyone to make it work. “We want to engage people – locals, staff and students alike. It’s beneficial for all animals, not just the hedgehogs.”

Getting outside, exercising, breathing in fresh air, meeting new people – it’s something anyone can get involved in, whatever their experience.

Bringing people together in an effort to preserve the local wildlife and fauna is a big focus for 2020. Students and staff can get their hands dirty in the Community Garden at Frenchay. Held twice a month, these drop-in sessions are great for learning new skills in vegetable growing, tree planting, making bug hotels, pruning fruit trees and other plants, learning more about seasonal horticulture, and much more. Richie finds this has helped many students struggling with stress.

Find more information on UWE Bristol’s grounds, biodiversity and ecology on the UWE Bristol sustainability pages or why not join the new bee preservation society?