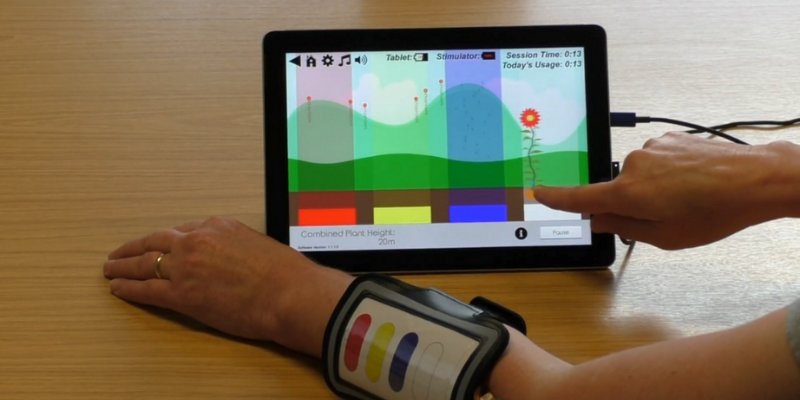 UWE Bristol academics have helped to develop an innovative device to tackle chronic limb pain which is currently being trialled across the UK.

The Sensory Training System aims to help patients regain a finer range of nerve sensation in their limbs, which they often lose due to constant, localised pain. While it may seem counter-intuitive, research has shown that if patients can retrain their brains to distinguish sensations in their limbs more clearly, their levels of pain will reduce.

The system involves four electrode pairs that patients wear on or close to their painful body part, as they play specially designed electronic games on a linked tablet device. The games ask them to correctly identify which electrodes are being lightly electrically stimulated as they move through a series of different scenarios. The tablet records information about the patients’ activities including time spent, levels reached, and accuracy.

The device was developed by Professor Candy McCabe, Professor of Clinical Research and Practice, at UWE Bristol and Dr Darren Hart, Principal Clinical Scientist at the Royal United Hospitals in Bath, in collaboration with colleagues at both organisations. A multidisciplinary approach has been taken to develop the sensory training system. Dr Mark Palmer, a Senior Lecturer in Computer Science and Creative Technologies at the University of the West of England, alongside undergraduate Games Technology students, were involved in creating the engaging games-based software.

Professor McCabe explains: “Over time, patients will have fewer neurons (nerve cells) representing these painful body parts ‘switched on’ in the brain because those neurons are effectively not having to work so hard – all they’re having to process is constant pain rather than subtle differences in sensation. If we can increase the range of the sensations that the limb and brain have to interpret, we believe that it will reduce the levels of pain for that patient.”

The trial hopes to collect information on 20 participants across the UK using the system daily for half an hour over four weeks. The level of pain patients are feeling will be assessed before and after the month to see if there has been an improvement. While it’s a small study, if the team can prove that patients can engage with the device for the length of time that is thought to provide therapeutic benefit, they will seek more funding for future trials and commercial product development.