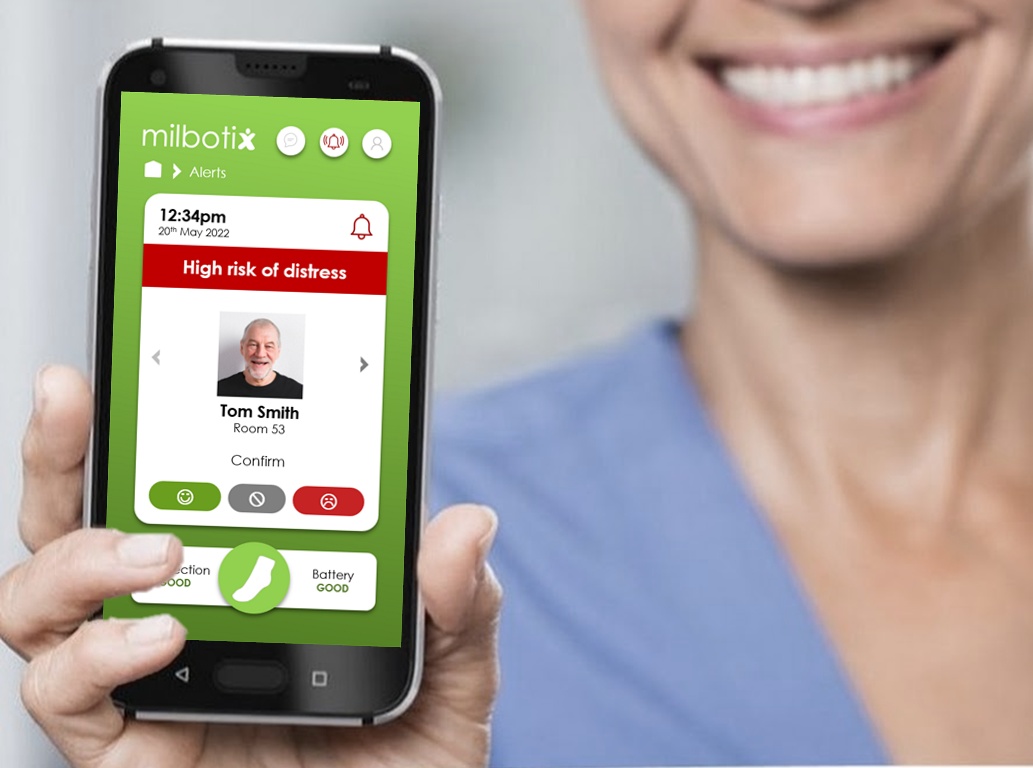 ‘Smart socks’ that track rising distress in the wearer could improve the wellbeing of millions of people with dementia, non-verbal autism and other conditions that affect communication.

Inventor Dr Zeke Steer quit his job and took a PhD at Bristol Robotics Laboratory so he could find a way to help people like his great grandmother, who became anxious and aggressive because of her dementia.

Milbotix’s smart socks track heart rate, sweat levels and motion to give insights on the wearer’s wellbeing – most importantly how anxious the person is feeling.

They look and feel like normal socks, do not need charging, are machine washable and provide a steady stream of data to carers, who can easily see their patient’s metrics on an app.

Current alternatives to Milbotix’s product are worn on wrist straps, which can stigmatise or even cause more stress.

Dr Steer said: “The foot is actually a great place to collect data about stress, and socks are a familiar piece of clothing that people wear every day.

“Our research shows that the socks can accurately recognise signs of stress – which could really help not just those with dementia and autism, but their carers too.”

Dr Steer was working as a software engineer in the defence industry when his great-grandmother, Kath, began showing the ill effects of dementia.

Once gentle and with a passion for jazz music, Kath became agitated and aggressive, and eventually accused Dr Steer’s grandmother of stealing from her.

Dr Steer decided to investigate how wearable technologies and artificial intelligence could help with his great-grandmother’s symptoms. He studied for a PhD at Bristol Robotics Laboratory, which is jointly run by UWE Bristol and the University of Bristol.

During the research, he volunteered at a dementia care home operated by the St Monica Trust. Garden House Care Home Manager, Fran Ashby said: “Zeke’s passion was clear from his first day with us and he worked closely with staff, relatives and residents to better understand the effects and treatment of dementia.

“We were really impressed at the potential of his assisted technology to predict impending agitation and help alert staff to intervene before it can escalate into distressed behaviours. Using modern assistive technology examples like smart socks can help enable people living with dementia to retain their dignity and have better quality outcomes for their day-to-day life.”

While volunteering Dr Steer hit upon the idea of Milbotix, which he launched as a business in February 2020.

“I came to see that my great grandmother wasn’t an isolated episode, and that distressed behaviours are very common,” he explained.

Milbotix are currently looking to work with innovative social care organisations to refine and evaluate the smart socks.

Charity Alzheimer’s Society says there will be 1.6 million people with dementia in the UK by 2040, with one person developing dementia every three minutes. Dementia is thought to cost the UK £34.7 billion a year.

Meanwhile, according to the Government autism affects 1% of the UK population, or some 700,000 people, 15-30% of whom are non-verbal part or all of the time.

Dr Steer is now growing the business: testing the socks with people living with mid to late-stage dementia and developing the tech before bringing the product to market next year. Milbotix will begin a funding round later this year.

Milbotix is currently a team of three, including Jacqui Arnold, who has been working with people living with dementia for 40 years.

She said: “These socks could make such a difference. Having that early indicator of someone’s stress levels rising could provide the early intervention they need to reduce their distress – be that touch, music, pain relief or simply having someone there with them.”

Milbotix will be supported by Alzheimer’s Society through their Accelerator Programme, which is helping fund the smart socks’ development, providing innovation support and helping test what it described as a “brilliant product”.

Natasha Howard-Murray, Senior Innovator at Alzheimer’s Society, said: “Some people with dementia may present behaviours such as aggression, irritability and resistance to care.

“This innovative wearable tech is a fantastic, accessible way for staff to better monitor residents’ distress and agitation.”