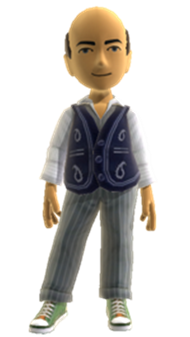 Dr Simon Scarle is a Senior Lecturer in Games Technology and Program Leader for the MSc Commercial Games Development.

Simon is a Theoretical Physicist by background, and previously worked in a number of postdoctoral roles producing computer simulations for various systems, before going to the Games Developer Rare Ltd. part of XBox Game Studios.

Whilst at Rare he chiefly worked on a GPU based particle effects system laying the primary elements of all aspects of its Asset Pipeline, from pulling in data from artist input to final runtime simulation. As a personal project he also merged his GPU particle work with his prior research work on Electro-Cardio dynamics and published the first paper of running such simulations on a GPU:  Implications of the Turing completeness of reaction-diffusion models, informed by GPGPU simulations on an XBox 360: Cardiac arrhythmias, re-entry and the halting problem

Computer games are some of the most unusual pieces of software, not only do they have to be produced under a design led process but make use of cutting edge and ever evolving technology all within the tight budget constraints of a creative industry project. This has led the games industry to create some of the most flexible and reusable code ever produced: Game Engines and their associated Asset Pipelines. Instead of producing code for a single game, an Engine is created as general software that can be repurposed to create any game by the technical team, whilst presenting an Asset Pipeline to the design team to allow them to create new content for these games without having to touch this low-level code.

A main example of this is Simon’s work on a generic network visualization tool called PhysViz. This started as a collaboration with a former colleague, Neil Walkinshaw, now based at the University of Sheffield, who had software that could analysis other pieces of software producing measures of various metric of its elements and how they interconnected. Most visualisations of software are rather fixed to address single questions, and so the idea was to create a much more customisable visualisation system. PhysViz could visualise a generic network and didn’t need to “know” what the data on that network was about, different file loaders could be made and then the designer of the visualisation could choose how their data got mapped on to the PhysViz’s visualisation. This “visualisation pipeline” effectively treated the software engineer as though they were a designer using the asset pipeline of a game engine and allowed them to create a range of visualizations without needed to recode PhysViz.

Some of the power of using a similar approach to the game asset pipeline for visualisations was shown when another former colleague of Simon’s, Chris Ewels, now at Nantes University, also approached him to visualise their work on carbon nanotubes. Due to the flexible nature of the underlying architecture of PhysViz it could be retooled to display the structures of his molecules within a couple of days, leading to the images below of a grinning colleague who is experiencing in VR a flight down the length of the molecule which is the subject of his PhD.

James Lear was one of Simon’s PhD students who expanded on this concept of using the Game Asset Pipeline concept more broadly in his thesis “The video game asset pipeline – A pattern approach to visualization” https://uwe-repository.worktribe.com/output/6844257 This involved describing the an Asset Pipeline as an Architecture Pattern, bringing wider attention to the design patterns of the pipeline.

This has also fed back into the teaching of one of Simon’s main modules for the MSc Commercial Games Development: Games Research & Development. The principal assignment for this module is to produce a prototype of a Games Technology based solution for a client external to games. This has led to a range of games and game-like implementations: range finder for a table-top battle game, serious games to raise awareness of suitability, layout your bathroom with tiles based on the home builder from The Sims, simulations of slime moulds and visualisations of molecules controlled by Xbox Kinect. Clients have been researchers from both with and without UWE and various SMEs.

[[Description of first picture: This is Simon’s Xbox Avatar. These Avatars were part of Microsoft Live accounts on the XBox 360. The system for them was produced by Rare whilst Simon was working there, and allegedly the waistcoat his is wearing was put into the starting wardrobe for the Avatars because of him. Simon took part in early alpha testing of the system and a designer ensured the waistcoat was in there to ensure he could make an avatar in his usual style.]]