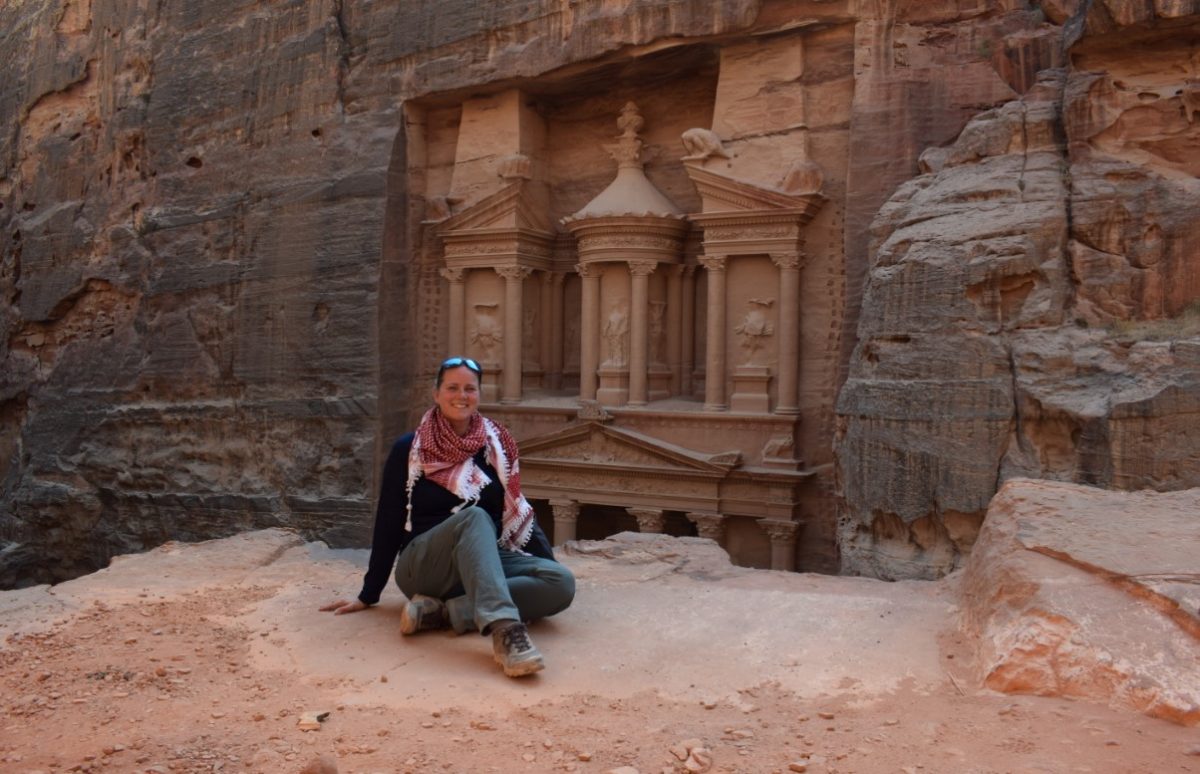 Dr Lisa Mol is a Senior Lecturer in Physical Geography and is part of the Centre for Water, Resilience and Communities.

Lisa is a geomorphologist, specialising in the deterioration of stone, which has enabled her to work in environments as diverse as southern Africa, the Middle East and the Arctic. She currently leads the Heritage in the Crossfire initiative, which investigates the effect of ballistics (e.g. bullets and explosives) on heritage stonework. Sadly, heritage has been, and continues to be, destroyed during armed conflict.

Therefore Lisa’s work focusses on first aid and triage for heritage: What happens to the stone structure when a bullet impacts? How does this impact vary between stone types? Does the previous deterioration of a surface (e.g. weathering) play a role in its response to an impact?

Ballistic impacts, such as bullets, can leave scars that not only aesthetically affect the heritage site but could be the surface manifestation of a much larger fracture network within the stone work which can threaten long-term conversation of the heritage site. She therefore coordinates a number of projects that investigate ballistic damage across heritage sites, using arena trials (highly-controlled testing on ordinance explosion ranges) and high-resolution laboratory methods to quantify the effects of ballistics.

This knowledge is then used to document and assess damage in current conflict zones, using remote training and technical support to aid colleagues on site. Most recently, this methodology was successfully applied on the Roman Theatre in Sabratha (Libya), and this work will continue in the Jebel Nafusa (Tunisia / Libya) in the coming years. The Heritage in the Crossfire project is supported by the Leverhulme Trust, the Royal Society, the Gerda Henkel Stiftung, ALIPH and the Kaplan Foundation.

Her work has had direct impact on this discourse through the training of heritage professionals in affected countries (Training in Action) as well as international CPP Army Divisions, and most recently in its inclusion in NATO briefings (Naples, October 2019). Her research attained further international exposure in articles published in Scientific American, Forbes, Smithsonian Magazine and ABC News. While the centre of her work has always been scientific discovery of the highest standard, she is passionate about knowledge exchange, ensuring that her research (and any carried out under her supervision) directly aids those most in need of the expertise and technology it develops.

Documenting and assessing conflict damage to heritage, and providing expertise knowledge to pinpoint areas at risk, not only benefits conservation practitioners but also contributes to damage prevention and front-line personnel training.

Through close collaboration between the Dr Mol and the UK Blue Shield (an international, voluntary organisation created and mandated under international law in 1996 to protect cultural heritage during conflict), the scientific findings have been translated a training programme for army personnel. Delegates from armies of the U.K., the U.S.A, Australia, The Netherlands, Italy and France have taken part in this training.

Dr Mol also regularly works with museums to discuss safeguarding of heritage in conflict, including the Victoria and Albert Museum and the Smithsonian Institutions.

Connect with Lisa on LinkedIn.