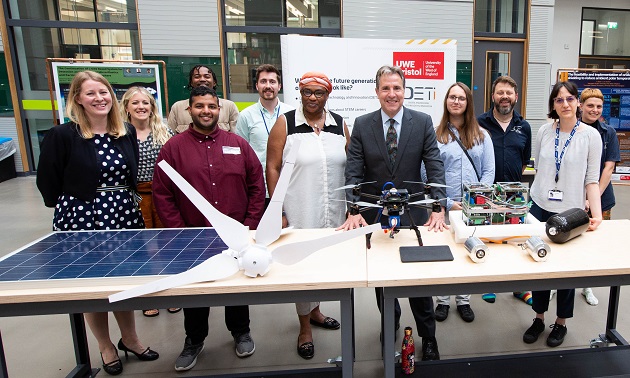 Metro Mayor Dan Norris met the bright young minds behind some of the West of England’s leading green tech initiatives, during a visit to UWE Bristol’s School of Engineering on Frenchay campus last week.

Mr Norris met some of the skilled young engineers and entrepreneurs behind some of the region’s leading green initiatives as part of the Metro Mayor’s second Jobs and Skills Summit, as well as being given an insight into projects to inspire the region’s future innovators.

The innovative tech on display included drones that measure microplastics in the air, built by award-winning student engineers at UWE Bristol, digitally engineered leak-proof hydrogen storage containers and machines that optimise the growth of the crops people eat.

Some of the programmes are funded through the Digital Engineering Technology and Innovation programme, a £5 million initiative from the West of England Combined Authority.

Green Skills is led by UWE Bristol and delivered in partnership with the Black South West Network and NatWest. It has received £760,000 of funding from the UK’s Government’s Community Renewal Fund and is overseen by the West of England Combined Authority within the region.

Mr Norris said the demonstration showed the abundance of talent across the West of England and applauded the talented youngsters supporting the region to reach its goal of becoming carbon neutral by 2030, and commented:

“I’m so pleased to meet the teams of enthusiastic young people who are pioneering environmentally-friendly technology, boosting the West of England economy and supporting our efforts to reach our net-zero ambitions. It just goes to show how much talent there is in the region, as well as the good, high-quality jobs there are for local people in future-proof sectors such as the green economy, helping us to tackle the climate emergency alongside the jobs crisis.”

Special thanks go to Associate Professor Laura Fogg-Rogers who arranged the summit at UWE’s new Engineering building. She also arranged for the mayor to get a preview of the DETI funded We Make our Future planetarium show.

The team from Explorer dome persuaded the Mayor and summit guests to take of their shoes and crawl into the inflatable planetarium for a taster of the engineering sustainability themed show designed to inspire the next generation of engineers. Read more about the show and it’s new funding to go into more schools in the West of England.

Altered from the original post on https://intranet.uwe.ac.uk/whats-happening/news/Article/Metro-Mayor-meets-young-minds-behind-best-of-West-of-England-clean-tech by Anthony Poploski.