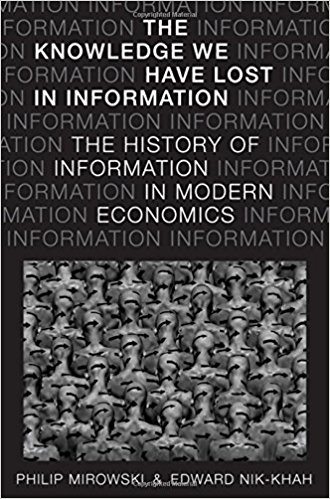 Fake news, post-truth, alternative facts, the commercialization of science, the wholesale destruction of university library collections in the name of “information access” and “digital first”; what does all this have to do with information economics? What happens to cognition, knowledge, truth, wisdom and understanding in the information economy? What are the vortices of images emerging between the natural and the social sciences that give rise to our understanding of “information”? What understanding of human beings is this based on? Who are the relevant actors, their politics and intellectual projects? Anybody concerned with such questions will benefit from reading the book under review, and these are what this review will focus on.

Mirowski and Nik-Khah present the comprehensive results of their fascinating research on information economics that began as far back as Mirowski’s work on cyborg economics and Nik-Khah’s dissertation and his Kapp Award-winning article on auction design. Their book is intended as a contribution to the recent history of economic thought, written in the style of a spy novel that tries to reconstruct who got us to where we are today and how this could happen. Theirs is a grand story of the Great Transformation of the economics profession into market engineers via modern information economics or market design theory. Spying as a method for historians of economic thought is meant to demonstrate these developments and to provide an alternative to performativity theory, which is deemed too vague to be able to account for the details of the interplay of material and intellectual factors. The book is structured into 17 chapters, some of which are as concise as six pages. The first two chapters set the scene and illustrate that there is something rotten about our understanding of the history and state of information economics. The core chapters deal with the roles of natural science, the Nobels and Neoliberals, the Socialist Calculation Debate, Hayek’s economics, Market Socialists at the Cowles Commission, the three schools of market design, two recent case studies, and a concluding chapter on artificial ignorance.

K. William Kapp once expressed his fundamental view that the dehumanization of economic theory and social reality are related and spring from an erroneous understanding of human beings. (Kapp 1985) So, what concept and understanding of human beings are at the base of information economics? (Though not FBI agents, information economists conventionally refer to human beings as “agents” which seems suitable to a spy novel.) The authors convincingly demonstrate, in particular in chapter 9, that information economists basically assume the irrelevancy of cognition and preferences of agents for the desired market outcome they are paid to design. This essentially means that information economists adopt a self-image of being smarter than people and being able to design mechanisms that extract the information from the agents that they are unaware of possessing. It seems that the quicksand of double truths inherent in this assumption remains hidden from their purview. They seem to have no trouble assuming that somehow all the limitations that apply to the agents of their models do not apply to themselves.

This goes back to similar double truths in the works of the intellectual behind the foundational ideas of information economics, i.e. Friedrich von Hayek, who denied people the ability to reason about society as a whole, while he reserved this right and ability to himself. Several chapters describe how the mature Hayek believed that people’s cognition can be disregarded as it does not matter for the operation of the market, which is conceived as an information processor (cyborg, machine, computer) more powerful than any human being. Furthermore, according to Hayek the market arguably expands into the realm of non-knowledge, i.e. the unknown unknown, that is subject to evolutionary forces and not within human conscious control. Success and failure in the market thus depend on ones inheritance of unknown unknowns. The best one can hope for is that the market sheds light onto one’s own total darkness in a way that it becomes marketable. In this tradition, market designers claim to be able to design markets that extract information from people’s unknown unknown, that is, to get agents to give up information they hold. Mirowski and Nik-Khah conclude that in this information economy the market no longer gives people what they want but people have to give the market what it wants (cf. the final chapter). While this seems to suggest that the inside of human beings somehow matters for the establishment of Truth, this is secondary to the overriding claim that the Market is the seat and arbiter of Truth. Truth is thus turned into a function of the unequal and arbitrary distribution of the ability to pay (what prevents the top 1% from buying Truth?).

Mirowski and Nik-Khah judge the essence of these views as pure Social Darwinism with a strong dose of predestination. (p. 69) Along with the authors I think that the mature Hayek’s grave error was to deny human beings to be the seat of the kind of Truth that is revealed as a gift from introspection, that is, self-knowledge that enables self-cultivation. Hayek’s highly problematic understanding of human beings is compounded by a problematic that Tony Lawson has recently pointed to in an interview (Lawson 2018). That is, Hayek denied the existence of bio-physical human needs that are objectifiable, such that their satisfaction can be planned in a social provisioning process. Otto von Neurath, Max Weber, K.W. Kapp and K. Polanyi called this material or substantive rationality.

This clash of views goes back to the Socialist Calculation Debate, which Mirowski and Nik-Kah identify as the birthplace of information economics (chapter 5). It is the great achievement of this book to have pointed out the seminal importance of this debate for understanding economics today. Unfortunately, the book does not mention the “lost” Neurath-wing of the Socialist Calculation Debate and only focuses on the Cowles men’s enthusiasm for a cybernetic socialism. According to the present book it was the market socialists following Otto Lange’s argument that developed information economics at the Cowles Commission. The authors support their main thesis with plenty of evidence that the market socialists “lost track of their political argument and deep motivations” and were haunted by Hayek to end up as neoliberals who sell themselves as experts in market design. This raises the question as to the reasons for the odyssey of Walrasian market socialists following Otto Lange’s intellectual project.