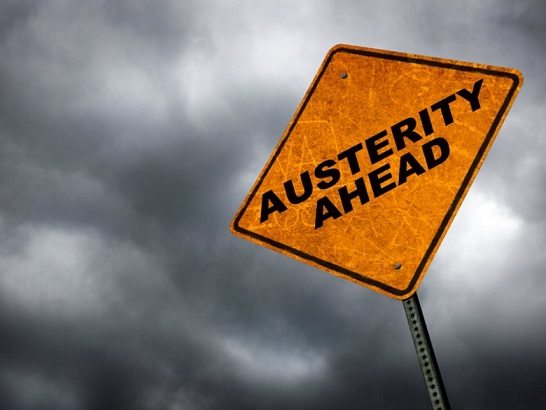 In a recent tweet, George Osborne celebrated the fact that the UK now has a surplus on the government’s current budget. Osborne cited an FT article noting that “… deficit reduction has come at the cost of an unprecedented squeeze in public spending. That squeeze is now showing up in higher waiting times in hospitals for emergency treatment, worse performance measures in prisons, severe cuts in many local authorities and lower satisfaction ratings for GP services.”

It is a measure of how far the debate has departed from reality that widespread degradation of essential public services can be regarded as cause for celebration.

The official objective of fiscal austerity was to put the public finances back on a sustainable path. According to this narrative, government borrowing was out of control as a result of the profligacy of the Labour government. Without a rapid change of policy, the UK faced a fiscal crisis caused by bond investors taking fright and interest rates rising to unsustainable levels.

Is this plausible? To answer, we present alternative scenarios in which actual and projected austerity is significantly reduced and examine the resulting outcomes for national debt.

Public sector net debt (the headline government debt figure) in any year is equal to the debt at the end of the previous year plus the deficit plus adjustments,

where PSND  is the public sector net debt at the end of financial year, PSNB is total public sector borrowing (the deficit) over the same year, and ADJ is any non-borrowing adjustment. This adjustment can be inferred from the OBR’s figures for both actual data and projections. In our simulations, we simply take the OBR adjustment figures as constants. Given an assumption about the nominal size of the deficit in each future year, we can then calculate the implied size of the debt over the projection period.

What matters is not the size of the debt in money terms, but as a share of GDP. We therefore also need to know nominal GDP for each future year in our simulations. This is less straightforward because nominal GDP is affected by government spending and taxation. Estimates of the magnitude of this effect – known as the fiscal multiplier – vary significantly. The OBR, for instance, assumes a value of 1.1 for the effect of current government spending.  In order to avoid debate on the correct size of the nominal multiplier, we assume it is equal to zero.[1] This is a very conservative estimate and, like the OBR, we believe the correct value is greater than one. The advantage of this approach is that we can use OBR projections for nominal GDP in our simulations without adjustment.

We simulate three alternative scenarios in which the pace of actual and predicted deficit reduction is slowed by a third, a half and two thirds respectively.[2] The evolution of the public debt-to-GDP ratio in each scenario is shown below, alongside actual figures and current OBR projections based on government plans. 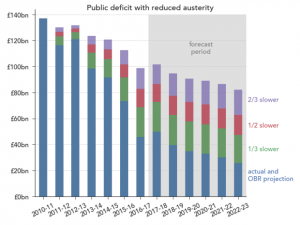 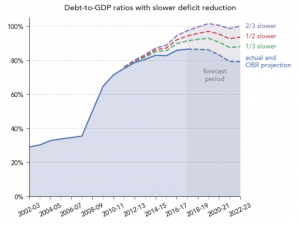 Despite the fact that the deficit is substantially higher in our alternative scenarios, there is little substantive variation in the implied time paths for debt-to-GDP ratios.  In our scenarios, the point at which the debt-to-GDP ratio reaches a peak is delayed by around two years. If the speed of deficit reduction is halved, public debt peaks at around 97% of GDP in 2019-20, compared to the OBR’s projected peak of 86% in the current fiscal year. Given the assumption of zero nominal multipliers, these projections are almost certainly too high: relaxing austerity would have led to higher growth and lower debt-to-GDP ratios.

Now consider the difference in spending.

Would this extra spending have led to a fiscal crisis, as supporters of austerity argue? It is hard to see how a plausible argument can be made that a crisis is substantially more likely with a debt-to-GDP ratio of 97% than of 86%. Several comparable countries maintain higher debt ratios without any hint of funding problems: in 2017, the US figure was around 108%, the Belgian figure around 104%, and the French figure around 97%.

It is now beyond reasonable doubt that austerity led to increases in mortality rates – government cuts caused otherwise avoidable deaths. These could have been avoided without any substantial effect on the debt-to-GDP ratio. The argument that cuts were needed to avoid a fiscal crisis cannot be sustained.

[1] There is surprisingly little research on the size of nominal multipliers – most work focuses on real (i.e. inflation adjusted) multipliers.

[2] We calculate the actual (past years) or projected (future years) percentage change in the nominal deficit from the OBR figures and reduce this by a third, a half and two thirds respectively. The table below provides details of the middle projection where the pace of nominal deficit reduction is reduced by half. 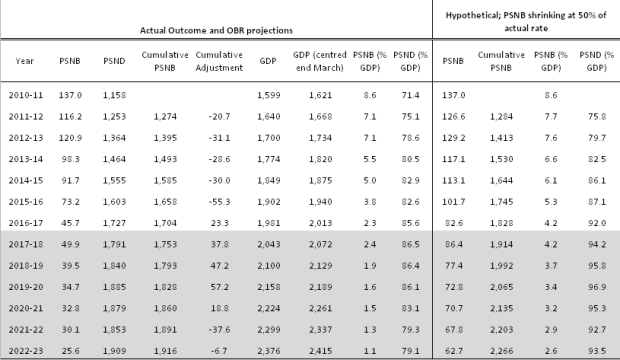