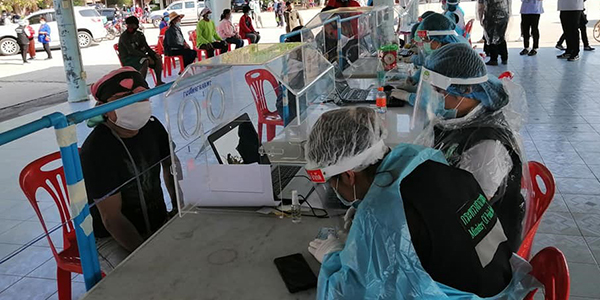 By Professor Vikas Kumar, Director of Research and Professor of Operations and Supply Chain Management

Thailand is one of the countries that has successfully managed COVID-19 outbreak control – the number of new infections is on the decrease and related deaths are limited. Playing a huge role in this success has been the country’s 800,000 active Village Health Volunteers (VHVs).

Each volunteer acts as a messenger and goes into the community to relay the latest news about  public health, as well as providing primary healthcare and planning for and monitoring of health issues. Their dedication strengthens the primary healthcare system and helps tackle the healthcare crisis, which now includes COVID-19. Each province contains approximately 104,000 VHVs, many of whom were active during SARS in 2002 and Avian influenza in 2004.

Having received a Newton Fund Institutional Links Grant, we are working with Mahasarakham University in Thailand and will initially assess how effectively VHVs are performing their role in COVID-19 limitation across Thailand, whether in suburban or more remote rural areas.

I will be leading an interdisciplinary team of researchers in Thailand (Dr Kittipol Wisaeng, Dr Amporn Kai, Dr Petcharat Lovichakorntikul, Ms Aim-on Tarakam, Ms Somsri Sungkharom and Dr Worawat Sa-ngaimvibool) who will be working closely with a range of local stakeholders (VHVs, Local medical practitioners like doctors and nurses, local government, councils, etc.). Also included in the team are researchers from the Innovation Operations Management and Supply (IOMS) research group (jointly led by Prof. Wendy Phillips and myself) at the Bristol Business School.

We will then look at ways in which VHVs might perform more effectively in COVID-19 control in the future as their ability to social distance, help implement curfews etc. is hindered by extraneous factors such as climate change. We will also outline operational and logistical challenges they face while executing their role in remote areas. These could include short- and long-term changes in mobility, landscapes, other emergencies (e.g. epidemics).

In line with these potential challenges, we will look at the associated developmental needs and ultimately our work will look at how we can re-conceptualize the role, forms, and management of VHVs in preparation for impacts of COVID-19 and other emergent epidemics.

Baed on our conclusions, we will put produce effective strategies and a toolkit to help VHV perform better in COVID-19 control in changing contexts.

All these additional innovations to the VHV scheme and lessons learned will better facilitate contributions to other countries in COVID-19 control as well as the control of other emergent epidemics.

By achieving the objectives, this project hopes to contribute significantly to existing literature and community practices in Thailand. The developmental strategies will help local government/authorities to increase the potentials of the volunteers for COVID-19 and similar outbreak control in the future. There is also an opportunity for other countries to learn from this project who are struggling to manage this pandemic.