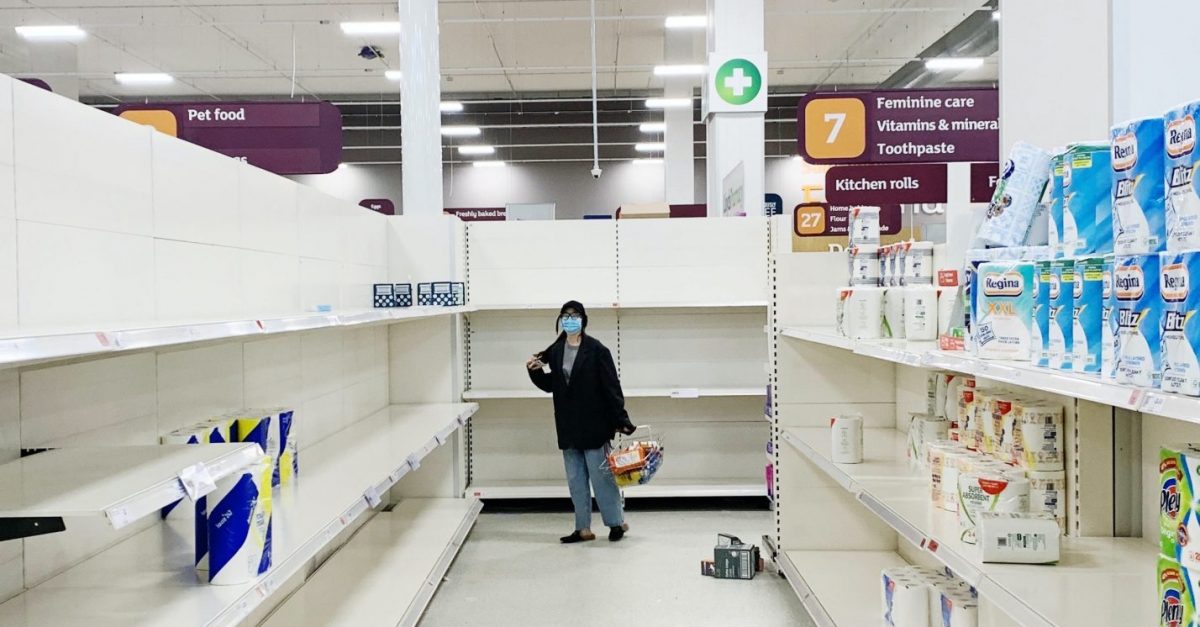 During televised news reports, Health Secretary Matt Hancock repeatedly asked people to stop stockpiling, because it was irresponsible and meant that other people couldn’t buy enough food to eat. But, what happens if stockpiling wasn’t the reason we had food shortages – and really, food shortages were inevitable regardless of stockpiling?

During the first lockdown in the UK, I conducted 19 interviews with people from 19 households across England and Scotland (3 people in Scotland and 16 in England; covering areas in and around Edinburgh, Liverpool, Manchester, Bristol, and London), and I asked them how they were shopping and eating.

These interviews started six weeks into lockdown, and they were completed within six weeks, so they covered food shortages, comfort eating and what it was like to go to the supermarket.

The households I spoke to relied on six resilience strategies to manage the shortages:

1) Planning: planning and list-making became common place where they hadn’t been part of someone’s usual habits before. Because the opportunity to buy food from outside the home had been removed, people found they had to account for a great deal more food and meals than previously. Supermarkets also began to impose upper and lower limits on both online and in-store orders, so households found they had to juggle those demands with the needs of their family.

2) Preservation Methods: the freezer was temporarily re-invented as a form of ‘active’ storage – so instead of foods being bought frozen and placed in the freezer when home, foods were bought fresh and frozen to lengthen their shelf-life. The people I spoke to were concerned about waste, and didn’t want to discard anything. Both of these suggest that food took on a new importance.

3) Changes the domestic food economy: prior to lockdown, it was quite usual to pop in to a supermarket and buy food to make dinner with. During lockdown, this was completely reversed, and in addition to preserving as much food as possible, the households I spoke to were looking at what was in the cupboards and finding out how to shop based on that.

4) Reliance on the informal economy: in every interview bar one, there was participation in the informal food economy of friends, neighbours and family which was new for participants, and began during lockdown to mitigate lack of food and potential hunger. This includes food received as food parcels from external organisations, supermarket runs, and items added to other’s supermarket shops or online shopping lists – and all but three participants procured food for others. This became a way of managing risk of coming into contact with coronavirus.

5) Earlier, unusual procurement: some households said they had started buying food a few days before they would usually go to avoid completely running out of food, and they would also buy types of foods that they wouldn’t usually. For example, UHT milk if there was no fresh milk. This was particularly true in households with dependent children, and seems to be an expression of care and concern.

Clearly, buying more food, and buying more food a little differently, was a feature of the lockdown, but statistics show there’s more to the shortages than first meets the eye.

Kantar has released two sets of statistics, one of which tells us that in 2019 approximately 30% of calories were consumed ‘on the go’ (coffee, take away dinners, lunch time meal deals, etc.). Turning briefly to stockpiling, we find that while excessive buying from supermarkets did take place in the week before lockdown, in 3% of the population, after this, people bought on average 34% more. So, that’s 30% more to account for the food that we used to eat outside the house normally, and an increase of 4% more – enough to provide an extra tin or two in case you’re asked to stay inside for 14 days, and need a bit of time to organise a friend or family member to deliver some food to you.

A real increase in food spend which is on average about 4% isn’t stockpiling, and the other 30% make up for food that people would have eaten anyway. So, we didn’t actually buy that much more food, nor take advantage of the opportunity to treat ourselves. However, there were food shortages for weeks. I put it down to the ’Just-In-Time’ (JIT) system that supermarkets use.

Supermarkets largely operate on a JIT delivery model. The JIT model aims to minimise the time that food is within the floor space of the supermarket – so it is delivered just in time to ensure it can be purchased. This system is vulnerable to unpredicted surges in demand as seen at the beginning of lockdown. This one surge in demand, followed by the steady increase in demand, has been enough to disrupt the lean estimates predicted by the JIT delivery system.

So, with or without stockpiling, the food shortages we saw were inevitable. By Vikas Kumar, Director of Research and Professor of Operations and Supply Chain Management

The ongoing COVID-19 pandemic crisis is having a major impact on the global food supply chains affecting segments such as farm production, food processing, transport and logistics, retailers and final demand. The sudden increase in demand for essential products triggered by panic buying/hoarding and the slow reaction of retailers to replenish them has exposed the limitations of cost-efficient and streamlined supply chains when it comes to being agile and adapting to unforeseen shocks. Therefore, it is important to draw attention to the challenges that COVID-19 related supply chains disruptions bring to the businesses.

For instance, the ongoing pandemic has meant labour demand in food production, food supply, grocery retail, transport and delivery services is massively outstripping current supply. In the UK, this has been further complicated by the shortage of seasonal agricultural workers, who hail from European regions. Some other potential challenges the food sector is currently facing are supermarket supply chain struggles, food delivery issues, food price hikes, risks to jobs and livelihoods, food waste and challenges imposed by shifting consumer behaviour. As the food sector has been severely impacted globally, it is essential that it develops a mitigating strategy to deal with these challenges.

This could include applying a holistic approach to managing supply chains. Food organisations need to develop higher resilience, which is needed if they are to build sufficient flexibility in their supply chains to protect against future disruptions.

In building this resilience, they also need to realise the potential benefits of digital technologies. IoT sensors for soil and plant monitoring, warehouse automation, blockchains for traceability, drones for delivery, data analytics for demand and supply management, are all examples of industry 4.0 technologies across the food supply chains that could bring numerous benefits to organisations. A combination of digital technology assets – data collection, data storage and management, analytics, and decision modelling – could help unlock farming’s potential as well as strengthen the resilience of supply chains.

Another step in the right direction might be a transition towards more sustainable practices such as the adoption of circularity in food systems, which advocates reducing the amount of waste generated in the food system, reuse of food, utilisation of by-products and food waste, and nutrient recycling.

The pandemic has also exposed the dangers of relying on a single supplier or single geolocation – the equivalent of putting all eggs in one basket – thus diversification of the supplier base is encouraged. Talking of eggs, the last few months have also shown a growing reliance on farmers markets and farm shops (called short food supply chains or SFSCs) for essential food, and their popularity will continue to grow as consumers are getting health conscious and more concerned about food safety and transparency.

The ongoing pandemic has created several challenges for the food system and many lessons still need to be learned. How these lessons are reflected in UK food policy will determine how effectively we deal with similar situations in the future.

The content of this blog is based on the following recently accepted paper, due to be published early 2021: Kumar, V. (2021, in press), Adjusting to the new normal: Challenges of the food sector in the wake of COVID-19. Journal of Supply Chain Management, Logistics and Procurement