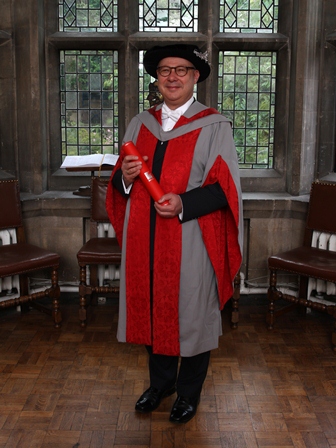 UWE Bristol awarded the Honorary Degree of Doctor of Laws to Jonathan Fisher QC in recognition of his outstanding legal expertise and academic contribution to the areas of financial and corporate law.

The Honorary Degree was conferred at the Awards Ceremony of the Faculty of Business and Law on Friday 17 July 2015 at Bristol Cathedral.

Jonathan is a leading barrister at Devereux Chambers in London specialising in financial crime cases. He was called to the Bar in 1980.

During his early years, he undertook a wide range of work involving family and civil law disputes as well as many criminal cases, often representing defendants in VAT gold bullion frauds. In 1991, he became Standing Counsel to HM Commissioners of Inland Revenue at the Central Criminal Court and London Crown Courts, a position held until 2003. During this period, he prosecuted major tax fraud cases including the case against Nissan UK where the tax loss exceeded £100 million. Also, he prosecuted cases for the Serious Fraud Office, such as the celebrated Millennium Champagne and Malt Whisky frauds.

After becoming Queen’s Counsel in 2003, he appeared for defendants in large cross-border VAT frauds. Today, he is known for advising and representing individuals, companies and Government authorities in domestic and international cases involving fraud, corruption, money laundering, financial markets offences and tax disputes. He was a specialist adviser to the House of Commons Treasury Committee in the last Parliament, assisting with investigations into LIBOR, Lloyds TSB and FOREX trading. He provides professional training on anti-money laundering issues for the European Union, Council of Europe and UKTI.

In parallel with practice, he has held academic positions at leading Universities. Between 1986 and 2006 he held part-time positions at the Cass Business School, City University London. Since 2006, he has been a Visiting Professor in Practice at the London School of Economics and teaches courses on Corporate Crime and Financial Crime on the LLM Programme. He was a Visiting Professor at the Hebrew University of Jerusalem in December 2013.

Between 2006 and 2010, he was a Trustee Director of the Fraud Advisory Panel and a member of the Assets Recovery Agency Steering Group between 2003 and 2006. In 2009, he was recognised for his work in the field of tax evasion, becoming a Fellow of the Chartered Institute of Taxation and a Chartered Tax Adviser by thesis. He has been a Committee Member of the International Bar Association’s Anti-Money Laundering Implementation Group since 2006 and an Honorary Steering Group Member of the London Fraud Forum since 2007.

He is General Editor of Lloyds Law Reports: Financial Crime and has published many papers on the international response to financial crime. The policies of the leading political parties have been influenced by his work.

Between 2006 and 2010, he was Chairman of Research of the Society of Conservative Lawyers and a Commissioner on the Commission for a Bill of Rights established in 2011.

The UK legal directories have described him as “high-flying”, “a standout barrister”, “academically very highly regarded”, “having great gravitas … where the stakes are high”, “calm, sure, and deadly at spotting the weaknesses of the opponent’s case”, and “judges defer to his knowledge”.

He is married with four children and lives in Essex. He suffers as a Tottenham Hotspur fan but enjoys the theatre, art and travelling very much.