The two Masterclass events were arranged by students from the Law Society and were designed to help students prepare for the Law Fair. The first Masterclass was on Applications. Anup Vithlani, the Head of Graduate Recruitment at International Law Firm Trowers & Hamlins, came from London with trainee solicitor, Miranda Hamilton-Wood to speak to the students.

Anup explained to the 90+ students in attendance what he looks for in the 1000+ applications that he receives each year for trainee solicitor positions at Trowers. MIranda explained to the audience how she applied for her training contract with trowers and what her experience has been like so far.

The second Masterclass event was on networking. Over 60 students came to hear Rachael Wheatley, Blue Green Learning and Helene Russell, The Knowledge Business give an interactive talk on networking.

Rachel addressed many common fears and misconceptions of networking and gave students the opportunity to practice networking in a relaxed environment.Helene then talked about how successful networking could be supported and enhanced using social media such as Twitter and LinkedIn.

The Masterclass in Networking was followed by the opportunity to practice networking further over some wine with some of the Law tutors as well as two trainees from local law firm VWV, who sponsored the event for the UWE Law Society.

Following on from the two Masterclass sessions, students had the opportunity to attend the Law Fair. 43  43 legal organisations from in and around Bristol took part in the fair, held in UWE’s professional courses teaching rooms. Exhibitors included representatives from Barristers Chambers, Law firms, the RAC, the Government Legal Service and other legal businesses and representative bodies. Over 300 students came to the event, attending various talks, a CV Clinic staffed by practising lawyers and meeting the exhibitors.

Feedback from the employers was extremely positive and included comments such as:  ‘…all of your students were very polite, bright and well prepared and we would very much like to participate in your next law fair’ and ‘Both the pupils and I enjoyed the event very much. I have posted a news item on our website about the fair, publically thanking you for organising the day.”

A new addition to the Fair this year was a Life in Practice Panel where over 75 students listened to  11 Trainee panellists from varying backgrounds, including a UWE graduate, talking about their experiences and giving advice on working in the legal sector. An important message for students to hear was that of staying resilient in a competitive market. 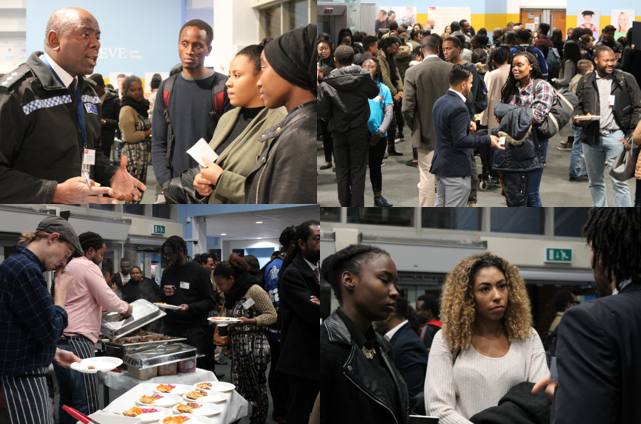 The Bristol Business School and the Bristol Law School celebrated Black History Month 2016 with a fantastic professional networking evening for BME students on 17th November 2016.  Over 50 Law and Business BME professionals and entrepreneurs from across Bristol joined us in order to share their career insights and advise our students.

Organisations in attendance included Elite Solicitors Ltd, Gregg Latchams, Albion Chambers, Bristol Pound CIC, GE Oil & Gas as well as the Black Police Association. Many professionals in attendance were UWE Alumni who were delighted to return to Frenchay and meet the next generation.

Guests and students were treated to a delicious and authentic Caribbean feast provided by the award-winning team at Biblos, managed and owned by UWE Alumni and entrepreneur Will Clarke, also in attendance.

The evening included networking activities and talks from finance experts and motivational coaches as well as inspirational UWE Bristol Alumni. Rodney Wilson (UWE Law) Managing Director of Elite Solicitors shared his career journey with a captive audience. Elite Solicitors opened in the heart of Bristol in 1991, it has since become the leading BME-predominant criminal defence and immigration firm in the South West.

Solicitor-Advocate Melissa Toney (UWE LPC) spoke of breaking several glass ceilings as a successful young black woman, and of her appearances before the Royal Courts of Justice. She championed our female students to set their sights high and go for it!

Rahat Ahmed (UWE Economics) founder of KnowYourPower delivered an inspiring and uplifting account of how he overcame personal struggles to graduate with First Class honours and establish a successful career in finance. Rahat spoke of success, determination and the pursuit of happiness.

The event, the first of its kind at UWE Bristol, was a huge success and energised over 100 students in attendance.

Photos from the evening can be found here.

Our thanks to all alumni who attended the event, which was organised by Dr Zainab Khan (FBL).

Tunde Okewale MBE, the founder of the charity Urban Lawyers and recipient of numerous diversity awards, will be delivering Bristol Law School’s Annual Lecture, ‘No one Rises to Low Expectations.’  Registration for this event will be available online soon.