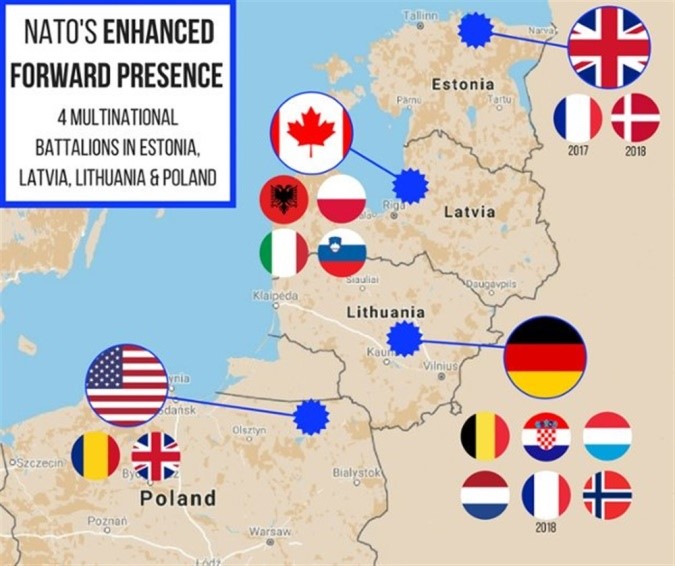 This post (edited for publication) is contributed to our blog as part of a series of work produced by students for assessment within the module ‘Public International Law’. We offer this module in the second year of Bristol Law School’s LLB programme. It is led by Associate Professor Dr Noelle Quenivet. Learning and teaching on the module includes the use of online portfolios within a partly student led curriculum. The posts in this series show the outstanding research and analytical abilities of students on our programmes. Views expressed in this blog post are those of the author only who consents to the publication.

The Washington Treaty was drafted with the intention that the North Atlantic Treaty Organization (NATO) would be a collective self-defence mechanism under Article 51 UN Charter, and not a collective security mechanism under Chapter VIII UN Charter (see this video that offers a quick summary of the origins of NATO and the reason it was founded). This was done with the aim of allowing it to react swiftly to Soviet aggression (Grady, ‘Article 5 of the North Atlantic Treaty: Past, Present, and Uncertain Future’ (2002) 31 Georgia Journal of International and Comparative Law 167, 183-184). Without a competing rival the Alliance steadily developed collective security aspects in order to confront the modern threats that plague the world. For this reason many have advocated for the renunciation of Article 5 of the Washington Treaty as they consider it anachronistic (Fedyszyn, ‘Saving NATO: Renunciation of the Article 5 Guarantee’ (2010) 54 Orbis 374); however, Russian revanchist foreign policy has become an even bigger defence concern to NATO than other threats. In this blog I will be arguing why Article 5 is not a relic of the past, and that the advantages that stem from its adherence benefit the Alliance in the 21st century and allow it to effectively respond with a cohesive and standardised spectrum of actions to the evolving nature of warfare. A Defence against Russia’s Hybrid Warfare

Russia’s answer to NATO’s rapid enlargement is the use of unconventional hybrid warfare tactics in order to retain its power projection in the region (Galeotti, ‘Hybrid, Ambiguous, and Non-Linear? How New Is Russia’s “New Way of War”?’ (2016) 17 Small Wars and Insurgencies 282). Could Article 5 be used in defence of such attacks? It is argued that it already does.

The discussion regarding defence against this mode of warfare began with NATO’s confirmation of the application of Article 5 in the event of such attacks; however, it was impossible for NATO to fully establish a threshold that would trigger a collective defence mechanism (see paragraph 13). That being said, due to its vague language ‘the final version of Article 5 is purpose-driven.’ (See Grady, ‘Article 5 of the North Atlantic Treaty: Past, Present, and Uncertain Future’ (2002) 31 Georgia Journal of International and Comparative Law 167, 186-188). This gives the Alliance an advantage, allowing it to counter a broad scope of actions that constitute ‘armed aggression’ resulting from military strategic evolution.

Russian hybrid warfare tactics, both conventional and irregular, are a fundamental challenge to the vision of a whole, free, and peaceful Europe. The two modes of warfare that NATO could actively combat are cyber-attacks and ‘paramilitary’ operations.

A Response to Cyber Warfare

After the 2007 cyber-attack which crippled Tallinn, NATO Members and Partners, for the first time, acknowledged the existence of this weapon. At the 2016 Warsaw Summit, NATO confirmed that a cyber-attack fell within the requirement of an ‘armed attack’ and could trigger an Article 5 response (see paragraphs 70-71). Equating cyberspace with the other domains means that the right to self-defence is now considered to be inherent in situations similar to that in 2007. This, in combination with a recent policy paper by the NATO CCD COE and a Tallinn Paper, means the Alliance has confirmed its preparedness to develop capabilities which will allow it to defend itself against the cyber-arm of Russia’s hybrid threat. NATO could further this by developing a legal framework and a structure allowing it to also employ offensive cyber capabilities. The Allies are also ‘expanding the capabilities and scope of the NATO Cyber Range’ (paragraph 71) by making bigger investments to their facility in Estonia.

By expressly making cyber-attacks fit within the definition of ‘armed attack’, NATO has acquired an edge in the asymmetrical war against Russia. A Response to the ‘Little Green Men’

In response to Russia’s anti-Western rhetoric, an increase in ‘snap’ exercises, express threats directed at NATO members and partners, and recent military campaigns (see also here), there has been a substantial increase on the Eastern flank of Allied defence installations, and troops, with upgraded abilities. If ‘little green men’ were to appear on the territory of a Member State they could be lawfully engaged as they are considered to have a combatant status (Reeves & Wallace., ‘The Combatant Status of the “Little Green Men” and Other Participants in the Ukraine Conflict’ (2015) 91 International Law Studies 361, 393-394).

The International Court of Justice has stated that in order for the right of self-defence to be invoked in response to an indirect armed attack it must be of a relatively large scale, sufficient gravity, and a substantial effect, and must be carried out on behalf of another State (Nicaragua Case). If the ‘little green men’ were backed by Russia, then NATO could, potentially, invoke Article 5 of it Treaty.

The September 11 bombings (see United Nations Security Council Resolution) set a precedent, in which Article 5 was invoked against non-state actors who had sufficient links to a State, through that State’s practices  (invasion of Afghanistan).

In conclusion, Article 5 of the Washington Treaty allows many modes of warfare to be utilised against Russian hybrid threats. However, the Alliance still needs to evolve in order to effectively combat this new type of warfare, instead of completely abandoning the idea of a joint European defence mechanism (see Fedyszyn, ‘Saving NATO: Renunciation of the Article 5 Guarantee’ (2010) 54 Orbis 374, 382-384). What has evidently pushed it to evolve, so far, is the ‘an attack upon one… is an attack upon… all’ rule, as it has created a cohesive and united effort in combating threats to peace and security. In other words, the advantages linked to this principle and its application far outweigh the disadvantages.